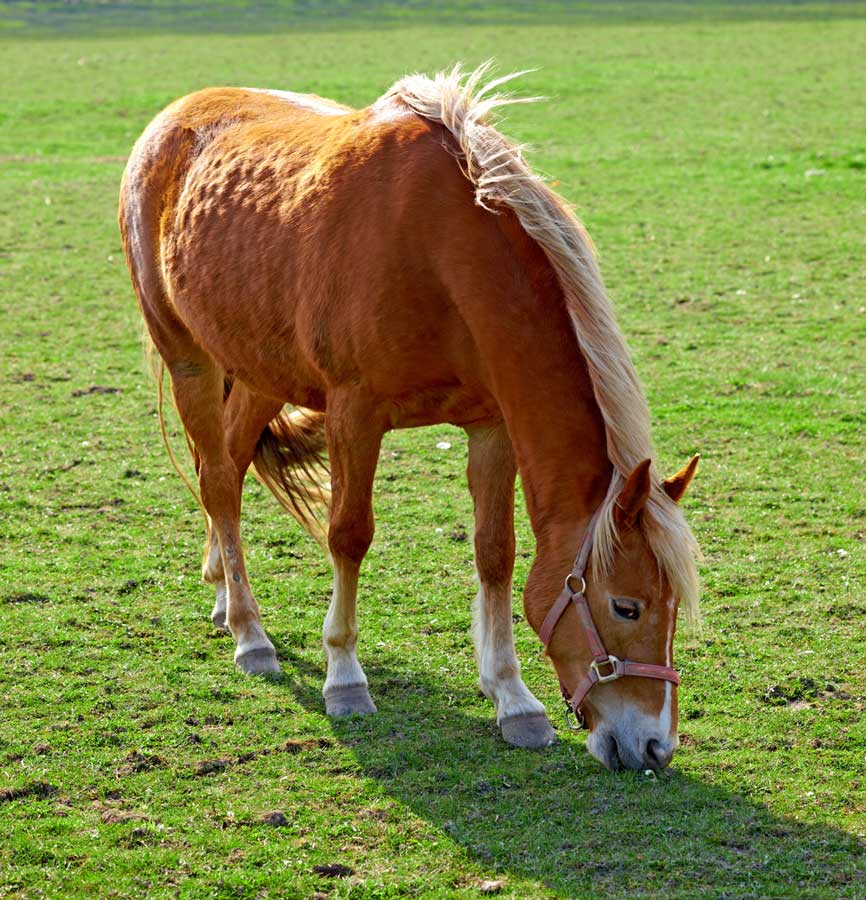 The early signs of pituitary pars imtermedia dysfunction ( Equine PPID) are subtle and may be difficult to notice.

As the weather changes, many horse owners will be helping their horse shed its longer, thicker winter coat. In some cases, owners may notice patches of longer hair that is slower to shed out in the spring or maybe even a little loss of muscle mass. These could be early signs of pituitary pars intermedia dysfunction (PPID), a disease that requires long-term management to keep a horse healthy.

Also known as equine Cushing’s disease, PPID can cause signs that are subtle and easy to miss, such as a decrease in activity. The disease can progress to include loss of muscle mass and hair coat changes.

“They may seem quieter than normal, perhaps duller,” notes Nicholas Frank, DVM, Ph.D., DACVIM, professor at the Tufts University Cummings School of Veterinary Medicine. “It progresses to changing the body of the horse. They begin to look a little thinner. The key signs of development are hair coat changes.”

A horse with PPID won’t shed out it’s haircoat until later in the summer, and owners may see patches of hair that still haven’t shed out. As the disease progresses, the horse will look thinner due to less muscle mass and display the characteristic thick, long haircoat that never sheds out at all.

Changes in haircoat is a sign that’s particularly noticeable in a herd of horses where most are slick, but one is slower to shed out compared to herd mates, says Steven Grubbs, DVM, Ph.D., DACVIM, equine technical manager, Boehringer Ingelheim.

“It’s something I’m not going to notice in February,” Grubbs says. “But in the spring and early summer, it shines a light and makes you think about that horse.”

Some owners may discount the early signs thinking their horse is too young for PPID to develop. For today’s performance horses, a 15-year-old horse is not considered that old, he adds.

“If owners notice a loss of muscle mass over the topline, there’s a kind of change in just where the saddle fits,” Grubbs says. “Now, when you start seeing one of these early signs, you start seeing others and piling up the changes. Abnormal sweating, although not considered an early sign, has been shown in a recent study to be a predictor of PPID. A veterinarian may not catch during an exam unless prompted by the horse owner. We really don’t have good prevalence data on PPID. According to the information we have, 15 to 20 percent of horses greater than 15 years of age will have PPID.”

PPID is considered the most common endocrine disease of horses. PPID-affected horses have a loss of dompaminergic inhibition, which leads to an overgrowth and/or enlargement of cells in the pars intermedia region of the pituitary gland. This decrease or lack of dopamine contributes to the production of abnormally high levels of many pituitary hormones, including adrenocorticotropic hormone (ACTH). Although the exact pathophysiology remains to be determined, these processes lead to the long list of outward problems seen in affected animals. All horses are going to undergo the aging processes that can lead to the development of PPID, Frank says. In some horses, this will occur at a faster pace. While older horses are more likely to develop PPID, veterinarians are seeing the disease develop earlier. Every breed is susceptible to PPID, but breeds that struggle with obesity and high insulin concentrations are more likely to develop equine metabolic syndrome (EMS), which can predispose them to PPID. EMS is another problem with the horse’s endocrine system.

“Ponies, Morgan horses and Arabian horses are predisposed to have problems with equine metabolic syndrome,” Frank says. “However, there are many horses from these breeds that don’t have EMS or PPID.”

“PPID is one of the most manageable diseases we have in the horse,” Frank says. “With proper treatment, we can see the horse return to normal and – even in the case of advanced horses – we can do a lot with medication.”

The mainstay of PPID treatment is Prascend® (pergolide tablets), which is the only FDA-approved treatment for the control of PPID. It must be given once daily for long-term management of the disease. PPID is a chronic condition. There is no cure.

Treatment can control the signs and lead to a better quality of life for the horse, Grubbs says. Typically, improvement may be seen within 30 days, but it may take longer for specific haircoat changes to improve. Occasionally, after starting on treatment, certain horses may have a decrease in appetite or a period of inappetence, Grubbs says. This can be managed easily by dose reduction or taking them off treatment for a few days. Prascend is single scored, making them easy to break in half if needed. Tablets should not be crushed due to the potential for increased human exposure.

“We’ve seen lethargic horses start feeling and acting better,” he says. “We’ve heard folks say ‘he’s back to his old self.’ What we want to do is manage the whole horse, and it’s easier to identify those early signs and treat it earlier.”

DSRs familiar with Cushing’s in dogs should note the disease has distinct differences in horses. “The diagnostics and treatment for PPID in horses are very different compared to dogs with Cushing’s disease,” Grubbs says.

Identifying PPID starts with a veterinary examination. However, owners and trainers are more likely to notice the early, more subtle signs.

“The majority of the time, it takes both the veterinarian and the owner,” Grubbs says. “I’m going to go out and see the horse once a year, or sometimes twice, and may not notice things in the course of a 10-minute exam like lethargy. The history we get from the owner is very important so it’s important for owners to become familiar with what those clinical signs are.”

After an exam, diagnostic tests are available to confirm a diagnosis of PPID.

For more advanced cases, a resting ACTH blood sample can be collected. PPID horses will have a higher level of hormone compared to benchmarks.

The outward signs of advanced PPID cases are well documented, which may lead a veterinarian to recommend starting treatment immediately.

“If a vet was looking at a horse with severe clinical signs, in that situation, he or she could easily start treatment and a diagnosis could be made on response to treatment,” Frank says. “For earlier cases, we do need diagnostic testing combined with a clinical evaluation.”

Many horses with PPID have compromised immune systems. Therefore, additional veterinary care should be provided to PPID horses. For those that also have EMS, high insulin concentrations predispose horses to laminitis. Grazing in the spring and early summer may result in laminitis more easily in PPID and EMS horses, Grubbs notes.

“We tend to have issues in the springtime because we’ve got a lot of fast-growing green grass containing a higher level of carbohydrates,” he says. “A lot of times laminitis will go unnoticed. Those horses may not get really lame. However, a farrier will look and see growth rings, or they may have had laminitis in the past. Maybe the horse really didn’t show a lot of pain. Repeat episodes still have devastating effects over time.”

In addition to watching for laminitis, PPID horses may need additional skin, dental and parasite control. Skin infections can be more frequent especially in the wintertime.

“The consequences of lapsing with good healthcare can mean dental problems if a horse develops a tooth root abscess or a foot abscess,” Frank says. “Good dental and farrier care are important to a horse with PPID.”

Even with these extra precautions and care, Frank notes these horses can still have a useful life.

“As long as they don’t have complications like laminitis, they can – and should – be ridden,” Frank says. “It’s a question of managing disease and the complications associated with it.