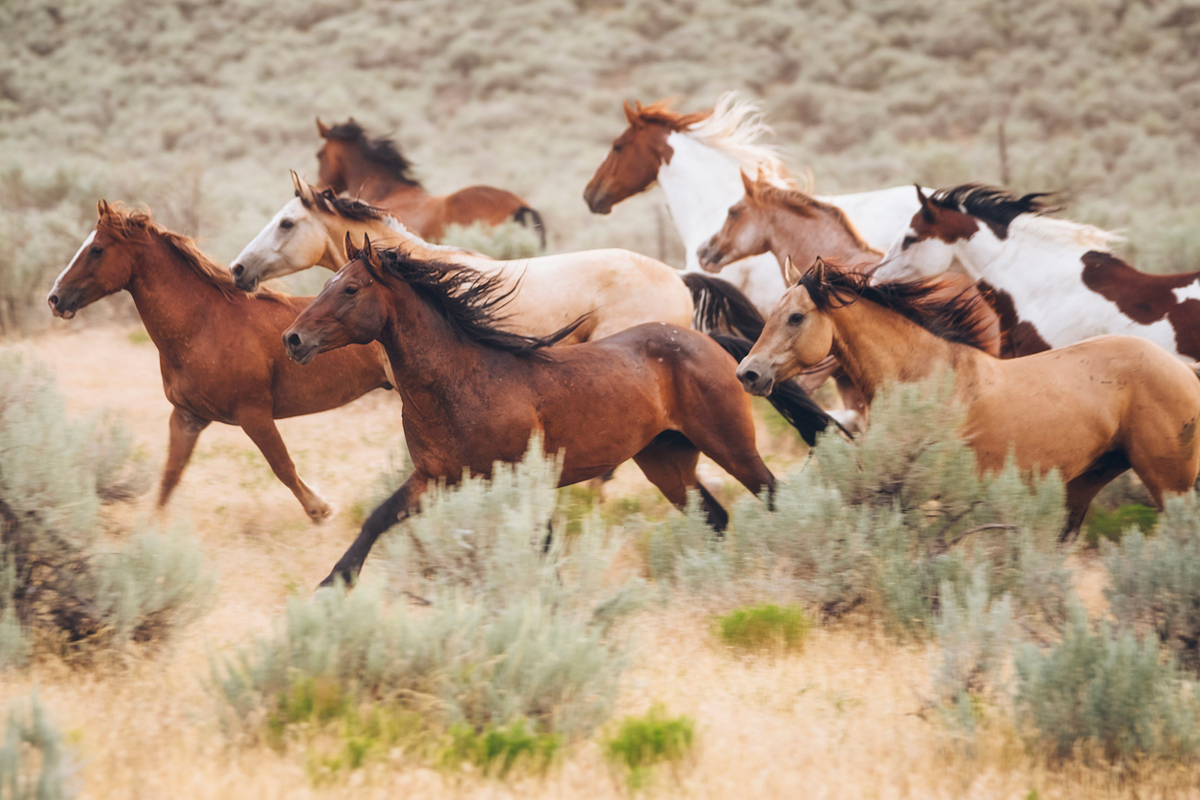 An equine influenza virus likely caused a mysterious respiratory disease that killed at least 95 wild horses at a Colorado federal holding facility, the Bureau of Land Management said. (The BLM noted many of the horses—of which more than 100 have now died—weren’t fully vaccinated against flu.) The deaths are part of a larger challenge officials face trying to manage wild horses and burros in the West, as about 86,000 animals roam public lands—more than three times what the bureau says land can support. The bureau rounds up thousands of horses every year and offers them for adoption. But the number of people willing to adopt has almost never been as high as the number of animals the government removes, leading to a growing surplus in a collection of corrals and pastures the bureau calls “the holding system.” The system holds more than 60,000 animals at a cost of about $72 million a year and includes the Colorado facility where the horses recently died. Critics say disease outbreaks like this are a sign of poor conditions at these facilities. Some say the government is rounding up the animals in an attempt to benefit the private livestock industry at the expense of the horses’ welfare, The New York Times reports.

The first known human case of H5 bird flu in the United States has appeared in a person in Colorado, the Centers for Disease Control and Prevention announced. The person tested positive for avian influenza A(H5) virus and was involved in the culling of poultry presumed to have been infected with H5N1 bird flu, according to the CDC. “This case does not change the human risk assessment for the general public, which CDC considers to be low,” the agency said. Officials said the patient reported fatigue for a few days as the only symptom and has since recovered. Globally, this is the second human case associated with this specific group of H5 viruses, which are currently predominant, the CDC said. The first was reported in Britain in December. Reuters has more.

Workers at farm- and construction-equipment maker CNH Industrial walked off the job last week after the company and labor union failed to reach a new contract. The strike involves about 1,100 workers at the company’s plant in Racine, Wisconsin, where its farm tractors are built, and Burlington, Iowa, where construction machinery is assembled. This is the first time in nearly 20 years that workers at the company, represented by the United Auto Workers union, have gone on strike. It’s the latest in a series of similar strikes, including one that lasted more than a month at CNH competitor Deere & Company late last year. Unions have pushed for higher wages and better benefits amid rising inflation, a tight labor market and rising corporate profits, The Wall Street Journal reports.

African swine fever has been found in a wild boar in Rome, the regional government said late last week. This was the first time the illness has been detected in the center of the country; several thousand wild boar are believed to live in and around Rome. An isolated outbreak of the disease was reported in northwest Italy at the start of the year, at which point China suspended pork imports from Italy. After that, the Italian government appointed a special commissioner to coordinate measures aimed at eliminating the disease, according to Reuters.

A federal grant will allow a Minnesota foundation to purchase mobile meat processing equipment in the state’s central region. Two Minnesota colleges will receive equipment to launch worker training programs through the initiative, which the U.S. Economic Development Administration said “will be matched with $740,000 in local funds and is expected to create 150 jobs, retain 200 and generate $20 million in private investment.” “Just a handful of large companies have come to dominate the meat and poultry industry, which means higher prices for consumers and shrinking earnings for farmers,” said U.S. Sen. Tina Smith. “This new investment will make Minnesota’s meat processing sector more dynamic and competitive while supporting hundreds of jobs.”