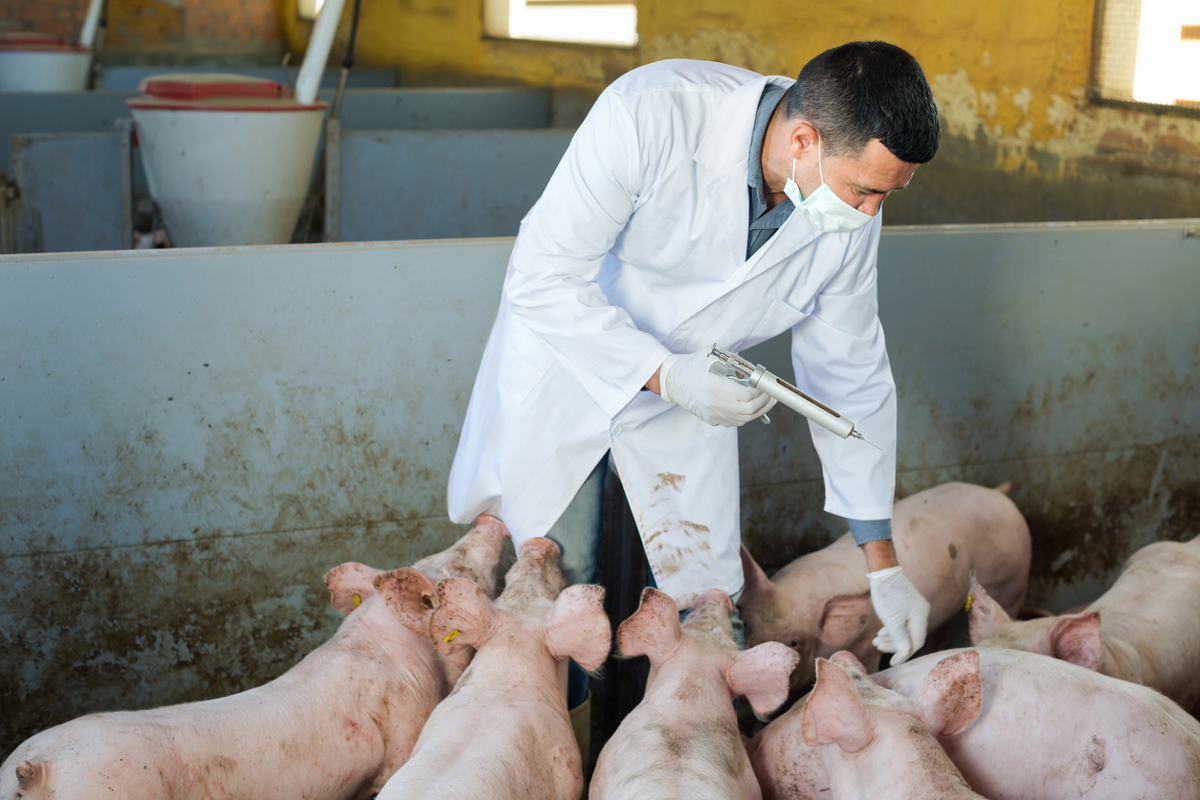 Heavy antibiotic use on farms may create conditions for pigs to pass deadly bacteria to humans, study shows

Scientists have found evidence that dangerous versions of superbugs can spread from pigs to humans, compounding fears that intensive use of antibiotics on farms is leading to the spread of microbes resistant to them, The Guardian reports. Researchers at Copenhagen University and Denmark’s Statens Serum Institut focused on Clostridioides difficile, considered one of the world’s major antibiotic resistance threats. The research team found strains of the bacterium in pigs that were genetically identical to strains found in Danish hospital patients over the same period. “We have still to show that the strains were passed from pigs to humans, but what our study does make clear is that farms that use antibiotics are creating conditions which allow resistant strains to flourish, and these will ultimately infect humans,” said Semeh Bejaoui, a researcher at Copenhagen University who was set to present the results at the European Congress of Clinical Microbiology & Infectious Diseases.

Amid bird flu threat, free-range producers weigh whether to bring their poultry inside

As bird flu strikes farms across the United States, free-range egg producers have to decide whether to bring their birds indoors to protect them from migrating waterfowl that may carry the virus. “We will keep them confined at least until early June,” the head of one Indiana-based free-range producer told the Associated Press. But Mike Badger, executive director of the American Pastured Poultry Producers Association, has a different plan. “We put them outside and they get in touch with the environment, so I think they have a better immune system to be able to fight off threats as they happen,” Badger said, adding that lower density of animals, air movement and less sharing of equipment in pasture-raised operations may help reduce the risk of infections. Research hasn’t proved a significant immune system difference in chickens housed outdoors versus indoors. Badger said the decision of whether to bring birds inside to wait out the annual migration of wild waterfowl is a farm-to-farm decision. Bird flu will likely remain a problem for at least several more weeks as migrating waterfowl continue to move in the Mississippi Flyway until June.

The United Kingdom is lifting a mandatory housing order for poultry and captive birds as the threat of bird flu decreases after the country’s worst-ever outbreak, Reuters reports. The country’s chief veterinary officers, who oversee animal health in England, Scotland, Wales and Northern Ireland, announced the decision to lift the order effective May 2, opening the way for production of free-range eggs to resume. The order has been in place since the end of November and has required all U.K. bird keepers to keep their birds indoors. The country still follows European Union rules, which allow for free-range laying hens to be kept inside for up to 16 weeks during a bird flu outbreak while retaining the free-range packaging label. But since March 21, all eggs from free-range birds that were being housed have had to be labeled as barn eggs.

Tyson Foods’ CEO issued testimony in advance of an appearance before a U.S. House committee last week on cattle and beef market practices. A combination of market forces including consistently strong demand for finished beef, constrained production due to labor shortages caused by the pandemic, and record inflation have been driving current beef prices, Tyson says in a press release. “Tyson does not set the prices for either the cattle we buy or the beef our customers purchase,” CEO Donnie King says in the testimony. “These prices are set by straightforward market forces, namely available supply and demand.” He adds that high beef prices are unrelated to industry consolidation. Concentration in the industry has been virtually unchanged for the last 30 years, he says, and during that time, ranchers more often than not had higher profit margins than beef processors.

Tyson Foods this summer will begin financing master’s, bachelor’s, associate degrees and other credentials for its U.S. employees. Through a partnership with the social impact company Guild, Tyson is expanding its existing Upward Academy program to include online access to more than 175 programs from 35 universities and learning providers. Tyson is making a four-year, $60 million investment to cover 100% of tuition, books and fees for employees. New learning opportunities will cover areas such as supply chain and operations, agriculture, manufacturing and automation, and sustainability.

Elanco Animal Health has obtained exclusive U.S. licensing rights for Bovaer, Royal DSM’s methane-reducing feed additive. The product has obtained approval in Europe, Brazil, Chile and Australia for beef and dairy cattle and is awaiting U.S. approval. Through a deal between Elanco and DSM, DSM is set to receive royalty income from Elanco’s sales of the product in the United States, in addition to a “single-digit millions upfront payment” and a portion of product supply from Elanco. Elanco projects more than $200 million in annual revenue potential from Bovaer, with initial contributions expected by mid-decade.