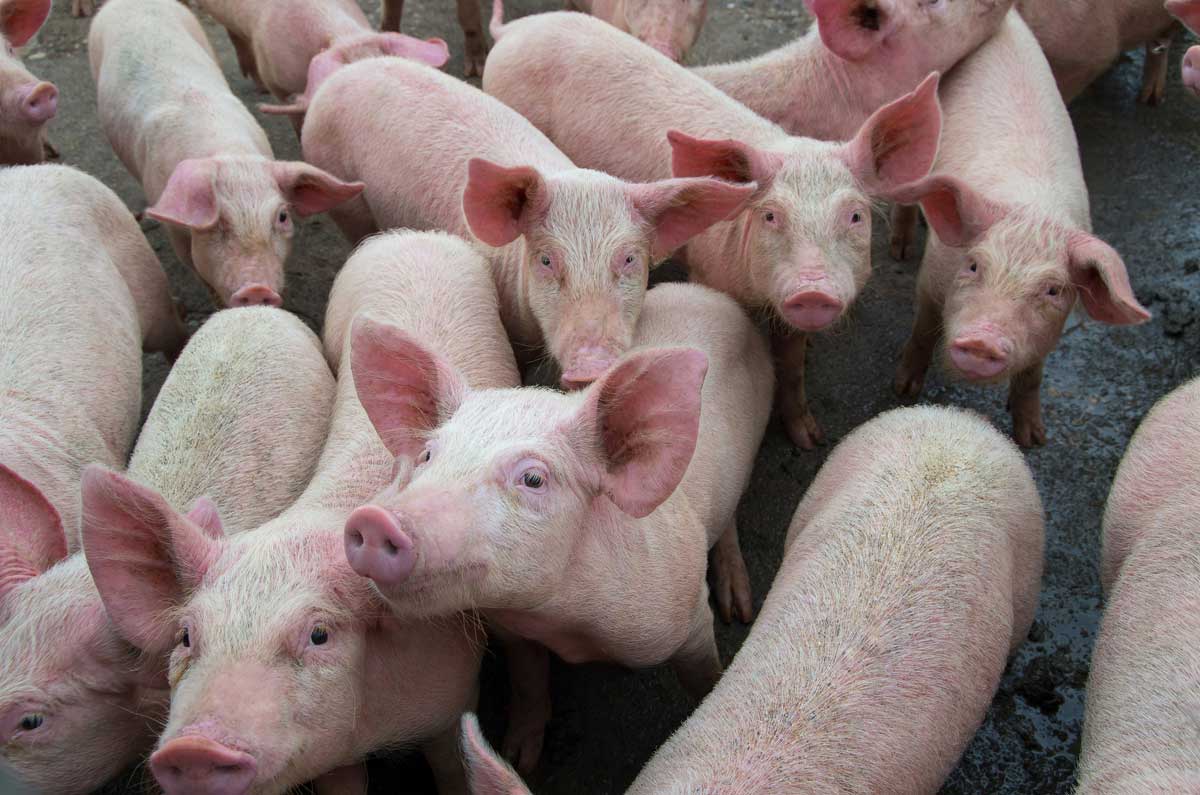 America is assisting other countries with African Swine Fever mitigation while gathering research to guide our domestic defense.

High fever. Coughing. These are clinical signs of a highly contagious and deadly viral disease – that only affects pigs. African Swine Fever (ASF) continues to spread west and has now made it as far as Western Poland. ASF has no human health or food safety risks, but it is a serious swine disease without a treatment or vaccine.

U.S. pork producers and government agencies are monitoring the disease’s spread and are working in cooperation with other countries to share veterinary knowledge and containment strategies. Keeping ASF out of U.S. hog farms for as long as possible is the best option for limiting the potential economic consequences. If the disease enters the U.S. swine industry, losses could be as much as $8 billion for the pork industry in the first year alone, according to calculations from Iowa State University. That doesn’t include related losses of up to $5.5 billion for affected commodities.

Here’s the scary part: The virus may have already made it into the United States – but it hasn’t made it into a hog farm. That puts U.S. pork producers on the front lines for their own defense.

“Whenever I talk to pork producers, I tell them that African Swine Fever probably has happened to cross into the U.S. at some point in a sandwich or meat product or on shoes or clothes,” said Paul Sundberg, DVM, director of the Swine Health Information Center. “It just hasn’t gotten into U.S. pigs. For producers, that’s where they are key. We can work with Customs and Border Protection on national biosecurity. Yet, there’s no assurance those things are 100% effective. Pork producers are part of the national biosecurity.” 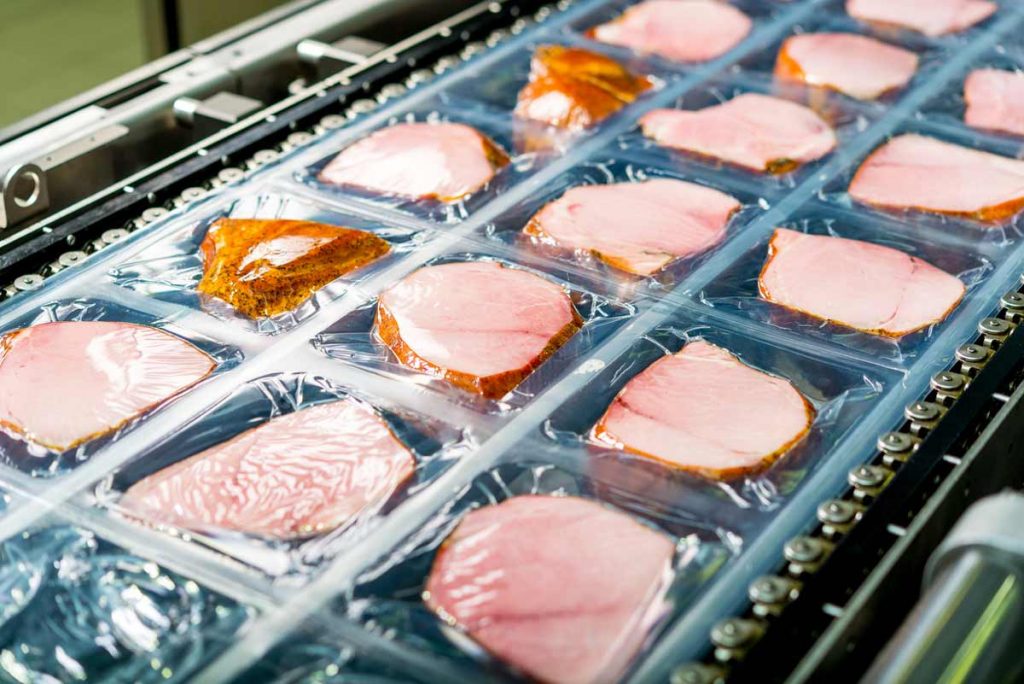 Outbreaks of ASF have been attributed to feeding contaminated pork products or direct contact with pigs. Kansas State University research demonstrates the infectious dose for ASF is extremely small for both feed and water.

The ASF virus survives in meat and blood at room temperature for several months and is resistant to temperature and pH extremes. Researchers also demonstrated that ASFV survives in feed ingredients, such as conventional soybean meal, organic soybean meal, soy oil cake, and choline under conditions simulating trans-Atlantic shipment from Eastern Europe to the United States.

The United States imports several feed ingredients from infected areas, according to a presentation by Chris J. Rademacher, DVM, Clinical Professor at Iowa State University College of Veterinary Medicine. The USDA does not have an ASF feed testing protocol validated. Therefore, he recommends producers discuss supply chain biosecurity with their feed suppliers. 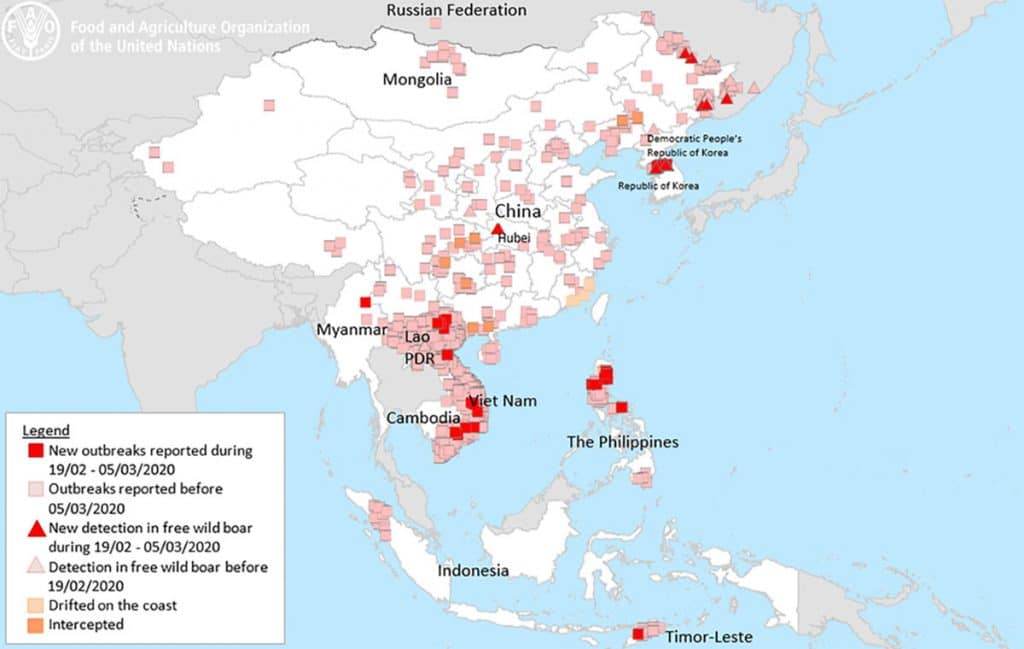 “When the U.S. broke with PED, we needed to do research quickly to manage PED. We don’t want to have to repeat that experience,” Sundberg said. “We are collaborating to do that research in Vietnam to help them and to be better prepared if ASF arrives in the U.S.”

Sundberg said the pork industry is preparing to mitigate the economic impact and disease spread in a number of ways. Areas of research include evaluating feed risks, disease pathway to entry, time and temperature recommendations for destroying the ASF virus on various surfaces and other things needed to be able to quickly and efficiently respond to an outbreak.

Also, as part of the grant, SHIC is working with the Canadian Food Inspection Agency (CFIA) and the USDA to develop tests using oral fluids rather than whole blood, which would reduce cost and simplify sample collection and submission.

Borders are the first defense

“We are continuing to ask Customs and Border Protection for metrics for their ability to track people that would travel into this country with food products, and especially pork products, which could be contaminated with ASF,” Sundberg said.

Exports and imports are also being evaluating on a country-to-country basis as the disease spread continues. The USDA assesses each country as positive cases of ASF occur. In some cases, the country is even assessed by zones. Because the disease can be spread by wild hogs, in addition to domestic pigs, controlling the spread is difficult. However, humans inadvertently contribute to disease spread.

In fact, the European Food Safety Authority (EFSA) says there’s evidence that suggests human-mediated translocation of the virus in Belgium, the Czech Republic, and western Poland.

“I encourage pork producers to review their own biosecurity practices with their veterinarian,” Sundberg advised. “Not just as it relates to foreign visitors to the farm, which occurs rarely. It should include things like people bringing their own lunches onto the farm, especially if those meals include pork products. Any contact the workers would have through relatives or others provides an opportunity for ASF to come onto their farm. It’s not just a big picture issue; it’s a local issue.”

“We really don’t know, but anything we can do to decrease the movement of contaminated products or people as a mechanism to move the virus would help decrease the risk,” Sundberg said.

The American Association of Swine Veterinarians, National Pork Board, National Pork Producers Council, and Swine Health Information Center are asking for proposals to identify gaps in U.S. pork industry national biosecurity that could result in the entry and domestic dissemination of diseases foreign to the U.S. pork industry. This work will objectively prioritize those gaps based on their potential to result in the introduction and spread of swine diseases.

Resources for proposals and instructions for submission to the National Pork Board can be found at pork.org/rfp/. The deadline for submitting the written proposals for initial review is 5 p.m. CST, April 14, 2020.