In the 1920s, hog cholera was a terror among the nation’s food animals. In the late 1800s, the disease ravaged hog farms, especially in the Midwest. According to Ole H.V. Stalheim’s account in “Agriculture History,” swine numbers in South Dakota decreased from 275,000 in 1894 to 150,000 in 1896 “mostly due to the ravages of hog cholera.”

Dr. J.N. Huff, a graduate of the Kansas City Veterinary College, moved to Denver, Colorado, in 1922 to open a satellite manufacturing plant to the original “American Serum Company” founded in Sioux City, Iowa. It was believed at the time that Denver’s high altitude provided hogs with added and enriched blood, so Colorado was considered an ideal environment for producing a new antiserum for hog cholera. In 1923, the small Denver plant began production and shortly thereafter separated from American Serum to become Colorado Serum Company. Hog cholera was eventually eradicated from the United States. 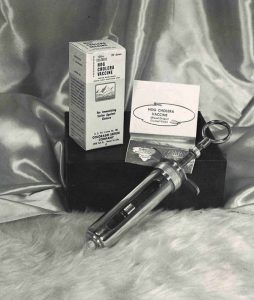 “It was during these early days of battling hog cholera that the animal health industry in essence was born and the development of vaccines to prevent sickness was underway,” said David Huff, J.N. Huff’s great-grandson and vice president of the company today.

Also, underway was the start of one company’s mission to provide personal, responsive service to the animal health industry through four generations of family ownership. This year, Colorado Serum Company is celebrating its 100th anniversary.

From its beginnings in the 1920s, CSC would go on to expand its product lines to include a full range of large animal biologicals, large animal veterinary instruments, veterinary diagnostics, specialty products, and laboratory reagents. The facilities now cover 22 acres in Denver and contain all manufacturing and administrative offices. Products are marketed and distributed by numerous animal health companies across the globe.

Through the years, the company has navigated challenges that include everything from the untimely death of its founder to the Great Depression, World War II, and ultimately, major consolidation within the animal health industry. Some key moments over the last 10 decades for CSC include:

CSC’s campus comprises animal handling facilities for over 150 horses, 80 cattle, 150 sheep, goats, and an assortment of turkeys, geese, chickens, and laboratory animals. CSC’s niche within the industry is developing unique products in which other companies may not be interested. For example, CSC says it has more biological products with label recommendations for sheep and goats than any other manufacturer; it has a bacterin for use in rabbits and even a vaccine for plague in wildlife. The company’s specialty products include Tetanus Antitoxin, Anthrax Vaccine, RB-51 brucella abortus vaccine, wart vaccine, and antibodies against the West Nile Virus. CSC also makes products such as tuberculin and several other bacterial or viral components for other manufacturers.

As an organization, CSC has avoided many of the trappings that can occur when family members attempt to work together, said Huff. “From the beginning, there has always been a mindset that what is best for the industry is what is best for Colorado Serum – a sense of dedication to animal health over profit. That has trickled down to the employees who also appreciate the ‘open door’ policy we as owners have and has led to a ‘family feel’ rather than a more corporate atmosphere.

“My grandfather always placed a high value on knowing the employees and took a great deal of interest in their personal lives,” Huff continued. “Our people were never just a number to him, and I think that mentality is still alive today.”

Additionally, Huff said he believes CSC is still pretty old-school, with some time-honored cultural elements that have survived over the years. These include taking pride in one’s work, showing respect to those around you, gratitude for customers, and never taking for granted the fact that the company has never missed a payday.

“As a testament to this, we have many families that have worked with us through several of their generations, and that kind of loyalty is quite rare these days,” Huff said.

Those old-school fundamentals continue to help CSC team members solve today’s customers’ problems. Huff said CSC has heard time and time again from customers about their frustration with not knowing where to find products in an industry that has seen many buyouts and mergers, on both the manufacturing side and distribution. “Every time these consolidations take place, certain products inevitably get dropped in the name of higher profits – to the point that we are now the sole manufacturer of many products we used to face competition with, and our customers appreciate that we have remained committed to that,” he said.

Also, CSC customers can directly call and get answers to their questions from a live person is increasingly important. “They may not always like the answer, but they appreciate that they can actually talk with someone,” Huff said. “Little touches like that are what make us uniquely positioned to offer a hands-on approach.”

Because CSC is smaller than the major manufacturers in the industry, the company can be quite nimble and quick when it comes to decision making and tackling any problems that arise with customers, Huff said. “In fact, one phone call will more often than not get you directly to the owner of the company.”

So what’s next for an organization celebrating 100 years of service?

“Obviously, we are a for-profit business, and we are always looking for ways to expand our product offerings,” Huff said. “However, the challenge will always be a balance of pursuing growth without sacrificing our attention to customer service and remaining available and in tune with their needs. We are known for our capability of manufacturing products that are difficult to produce or that don’t have huge profit margins but are nonetheless important to animal health. Balancing that along with finding ways to improve our production methods and finding new opportunities are the keys for us to stay healthy and an important piece of the puzzle in staying relevant in the industry.”