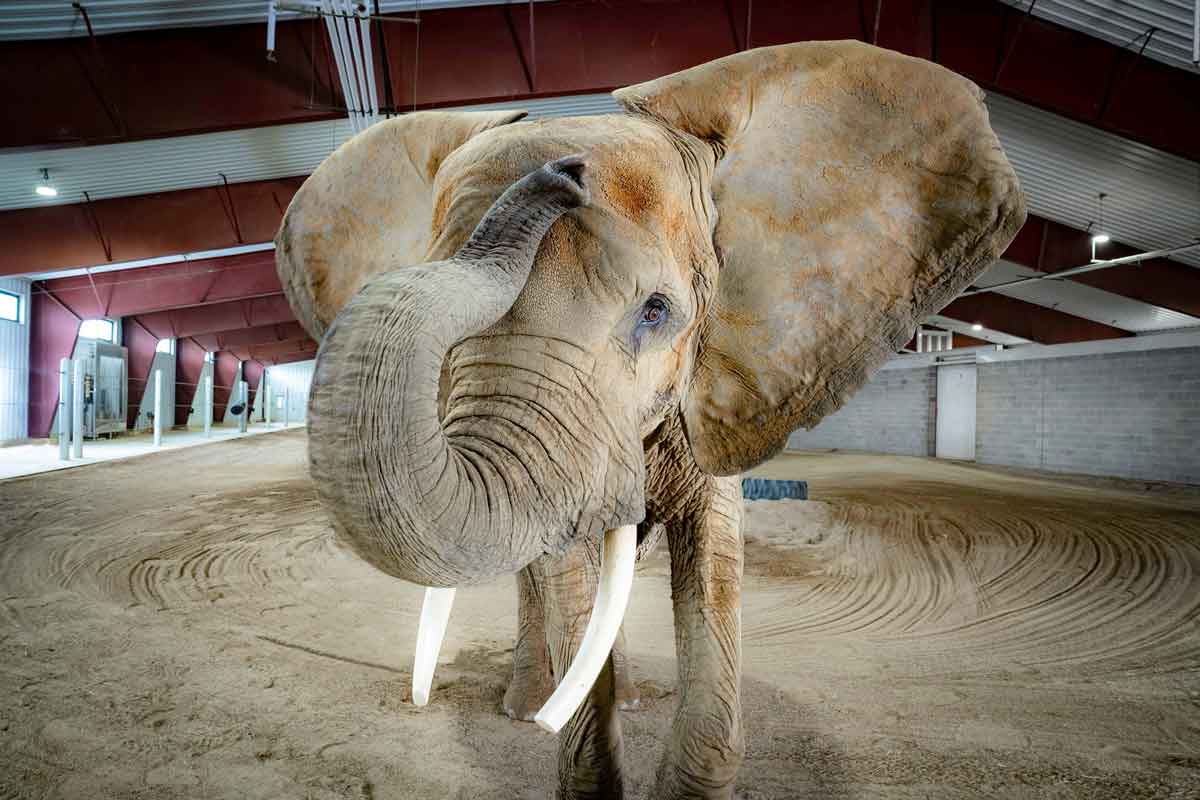 Building hay feeders for elephants as part of an innovative SAE shows these FFA members the diversity of career options in agriculture.

When Peyton Harding learned that his welding class at Berlin Brothersvalley High School was going to be designing a hay feeder for the elephants at the International Conservation Center (ICC) in Somerset, Pennsylvania, he was skeptical.

“An elephant isn’t an animal people are around much; it’s not like we walk out into the field to feed one in the morning like a cow or a horse,” Harding says. “I had no idea how we were going to make something that would hold up to such big animals, but it sounded like it would be a cool project.”

Senior elephant keeper Thomas Bakke was leading a tour at ICC for several school board members and teachers when he overheard FFA advisor Dan Miller talking about the high school welding class. It sparked a conversation about opportunities to work together for the benefit of the elephants and the students.

ICC is part of the Pittsburgh Zoo and PPG Aquarium, and it’s considered a premier conservation, education, breeding, and training facility that specializes in the care of African elephants.

Hay is the primary diet for the five elephants living at ICC. The herd consumes an estimated 6,000 bales every year; most of the hay is grown onsite. Bakke and the other elephant keepers used to toss hay on the ground, but he admits the setup wasn’t ideal.

“If we put out a quarter bale of hay, it’s going to be gone in 15 minutes,” Bakke explains. “If we suspend the hay in a net that hangs 20-plus feet off of the ground, it’s going to quadruple the time it takes for them to eat it. Elephants are smart. Their gears are always turning, so we want to keep them busy.”

Enrichment is great for animals, including elephants. It encourages them to think, discover and determine what to do. The hay feeders provide that opportunity by providing a form of mental stimulation. 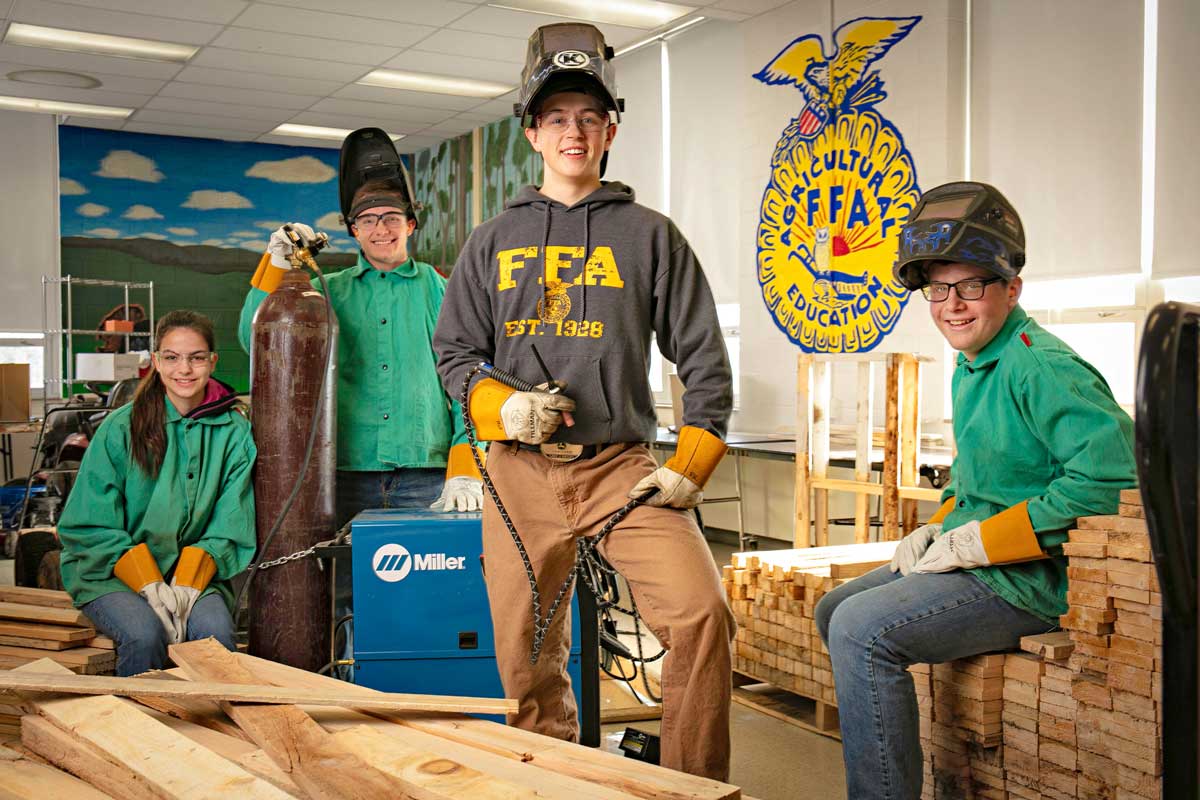 Members of the Berlin Brothersvalley High School FFA Chapter were excited about the idea of building hanging hay feeders for the ravenous pachyderms, but they needed more information to get started. Bakke provided a tour of the elephant habitat at ICC, along with information about African elephants and their specific behaviors.

Bakke shared his vision for how the ideal hanging hay feeder would operate, explaining that the model had to be designed from a schedule 40 steel pipe, had to include a mechanism that could raise and lower the hay bag, and had to have an arm that rotated 180 degrees so elephant keepers could fill it up without entering the enclosure.

Students came up with several prototypes, and the ICC selected the final design. The feeder stands 21 feet tall, and a bearing system allows keepers to fill a hay bag hanging at the end of a 10-foot arm and swing it out into the enclosure, locking it in position. The feeder is bolted onto a 12-foot-tall I-beam that serves as the fence post.

Selecting materials that can withstand the demands of elephants that weigh up to 11,000 pounds was no small feat. Keeping costs in check was also a challenge.

A pair of brand-new metal bearings cost upwards of $36,000, sending students back to the drawing board for alternate solutions. Using bearings salvaged from the wheel assemblies of old cars — at a total cost of $39 — proved to be an affordable and durable alternative. 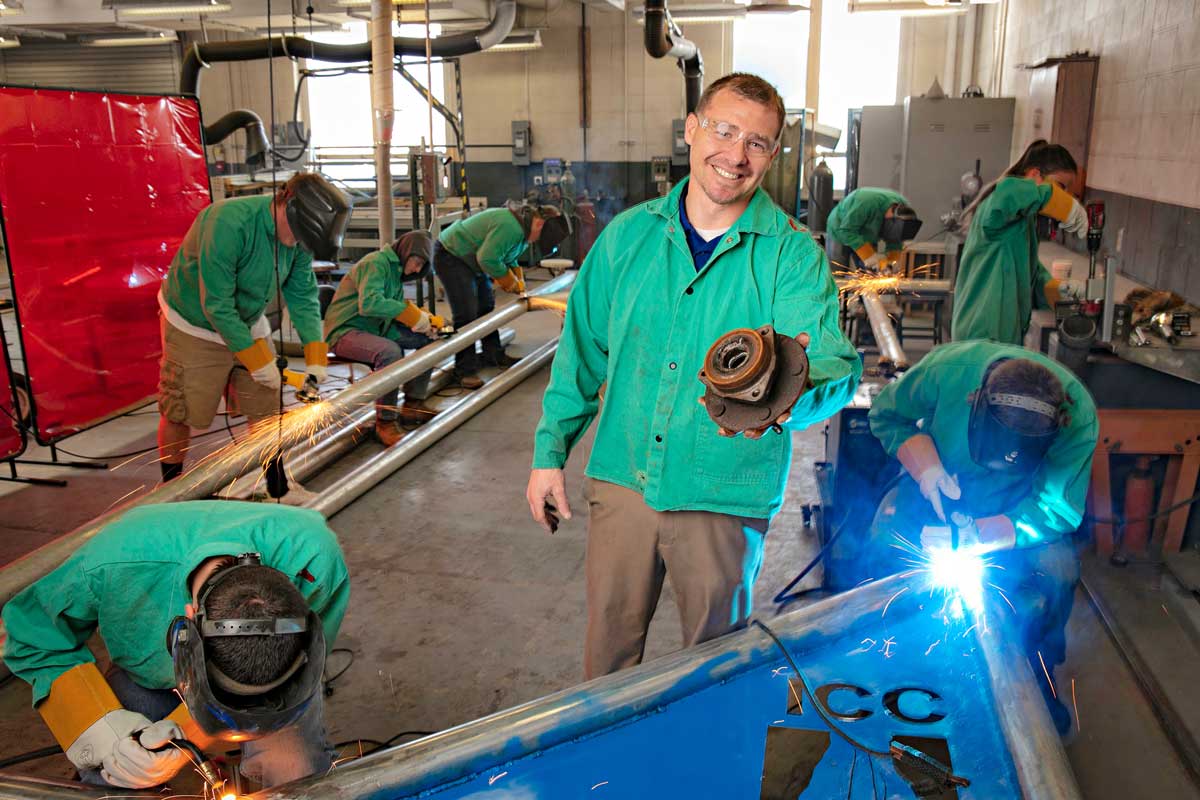 “It was so rewarding to watch these kids go through the thought process to make this feeder,” Miller recalls.

Despite the challenges, Miller believes the FFA members had a lot of fun and learned that agriculture is not all about corn and cattle.

“It’s not every day you get to work on a project with the Pittsburgh Zoo. Most supervised agricultural experience projects involve gardens or traditional beef or dairy farms,” he says. “With this project, students got to experience other potential career paths in agriculture.” 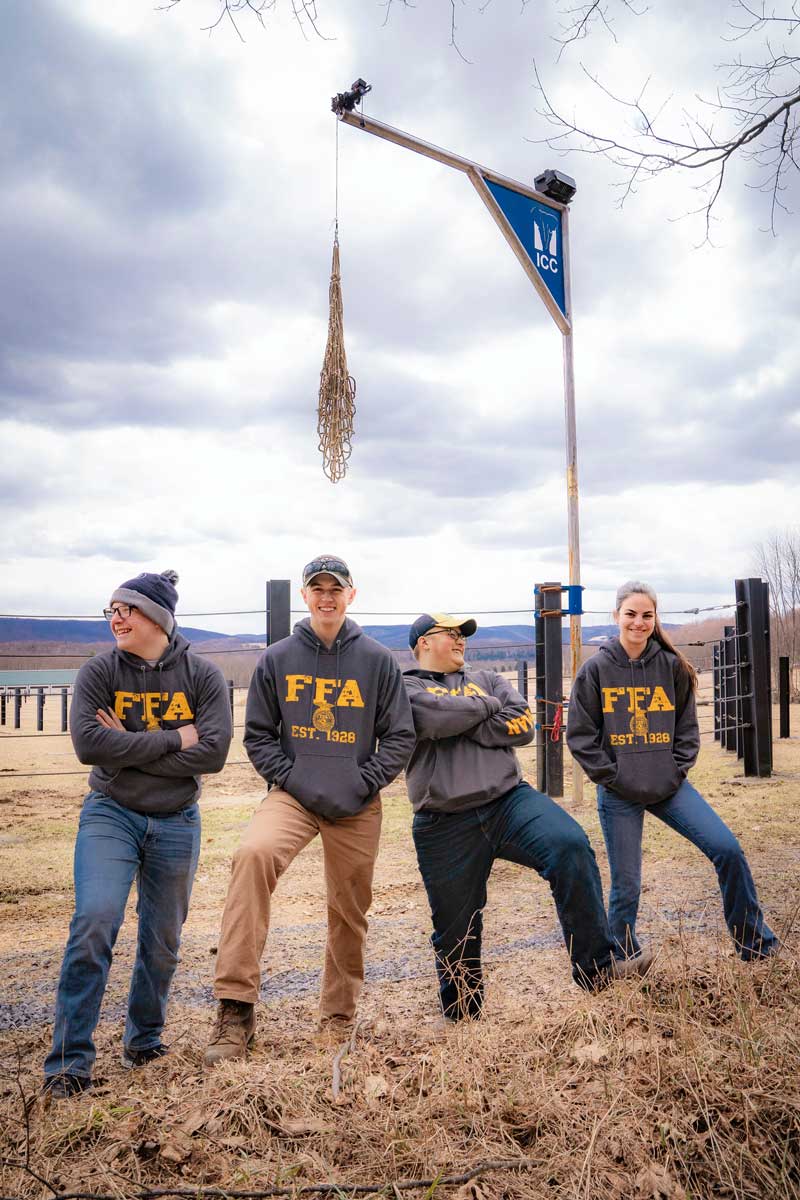 The students were invited to the ICC to help install the feeder and to see the elephants use it for the first time.

Harding says the experience was rewarding. “It was great to make something the elephants could use and to know that we were a part of making something that could help them.”

While all of the elephants loved the new addition to their habitat, for one ICC resident, the innovative hanging hay feeder has been life-changing.

A 40-year-old elephant named Bette, the shy, geriatric female in the herd, loves her feeder and is often the first one out in the morning to eat. Bakke was thrilled.

“Just lifting hay off of the ground might not seem like much, but it significantly impacted their behavior,” he says. “When we see positive changes like that, it shows that providing enrichment and altering their habitat and how we present their food are of critical importance to their health.”

In fact, the feeder was such a hit that Bakke asked the Berlin Brothersvalley High School FFA Chapter to build more. Students are currently working on a second feeder and have made minor tweaks to the design, including a stronger pin to keep the feeder locked in place. The goal is to have six hanging hay feeders in the elephant habitat at ICC.

Bakke believes the project will have an impact that extends beyond the elephants living at ICC. “The big thing about having elephants is that we’re able to inspire the younger generation to care about them,” he says. “In Africa right now, we’re losing upwards of 100 African elephants per day due to the ivory trade and habitat loss, but we can’t inspire people to care about elephants if they’ve never seen one. With this project, we were able to make our elephants’ lives better but also, hopefully, to inspire the next generation to care for them.”

The partnership between the International Conservation Center (ICC) and the Berlin Brothersvalley High School FFA Chapter in Pennsylvania did not end after the first hanging hay feeder was installed last spring. Armed with their knowledge of elephant behaviors and the importance of providing enrichment activities in the habitat, students started developing prototypes for additional feeders.

“The students built several scale models of different prototypes and presented them to ICC,” FFA advisor Dan Miller explains. “We just had one approved, and the ninth-grade welding class has started working on building it.”

The new feeders operate with a series of levers that elephants must push or pull with their trunks to release treats like sweet potatoes and apples. The treat dispensers will be used as tools to help handlers teach elephants commands.

“These are once-in-a-lifetime opportunities that aren’t available in most other school districts,” Miller says. “We’re fortunate to have a partnership with ICC that shows students the diversity of agriculture.”