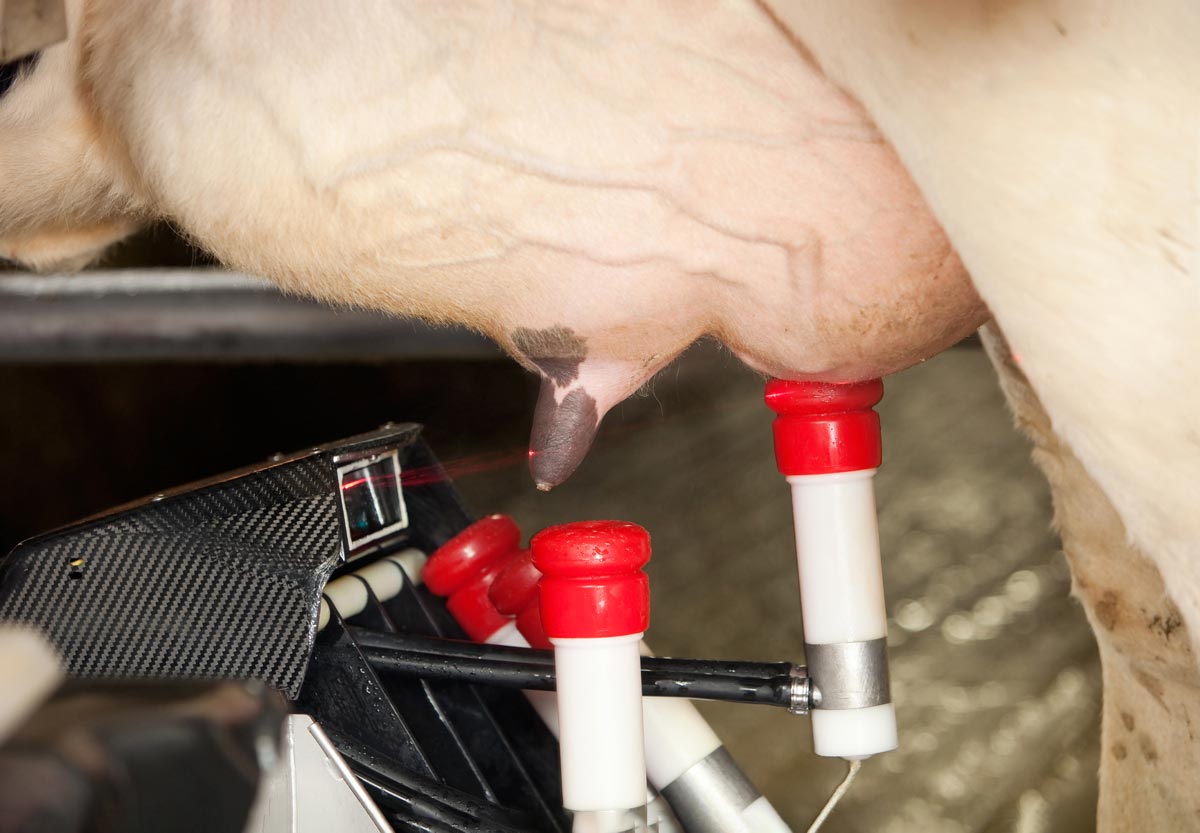 Getting Ready for Robotic Milking

U.S. dairy producers have been slow to adopt robotic milking. Is that about to change?

Robotic or automatic milking systems (AMS) for dairy producers have commercialized in Europe more than three decades ago. Yet only around 5% of herds in the United States have adopted the technology, compared to Canada where about 15% of cows are being robotically milked.

“We have seen a lot of interest from larger dairies in the United States in the last four or five years,” said Jack Rodenburg, owner of DairyLogix Consulting. “So, I expect the U.S. number to rise quicker in the next decade. ”

Robotic milking offers improvements in cow comfort, productivity, and longer herd life – but infrastructure and management changes must be made to accommodate a new paradigm for milking.

Holding the U.S. back

For small U.S. dairies, poor access to credit and lower profits have slowed the uptake of robotic milking.

“The dairy price picture hasn’t been very good for the last five years,” said Douglas J. Reinemann, Ph.D., professor of biological systems engineering at the University of Wisconsin-Madison. “Even given those low milk prices, we’ve seen farms taking that risk and making these sorts of decisions to invest in the future of the dairy. Keeping it a family-run dairy operation required that kind of investment to keep the next generation interested and willing to continue.”

Robotic milking eliminates milking labor and replaces it with the much smaller task of fetching only a few cows that don’t come on their own. Typically, that reduces the in-barn labor by 25 to 30%, Rodenburg explained.

The trade-off of reducing labor costs is increasing the investment in equipment.

“When you increase capital costs, you reduce the labor cost,” Reinemann said. “Right now, farms are still trying to figure out how to do that. In the robotic parlor system, you have to get up to a certain size to make those systems efficient. There have to be enough cows for one person to manage individually.”

This makes robotic milking a better choice for smaller operations with room to grow. Most robotic milking systems are being installed on small farms where the owner is providing a significant portion of the labor, he said.

“What we’re seeing is that one manager of a robotic milking facility could probably handle four robots or up to even eight robots with 60 to 80 cows on a robot,” Reinemann said. “There is the opportunity to grow with this equipment. The sweet-spot is in a typically family-owned operation growing from 200 cows to 500 cows where the economics are the best.”

Above 500 cows, producers have captured most of the economy of scale of robotic milking.

“It makes it a 500-cow robot operation economically competitive with a larger robot farm,” Reinemann said. “The economics are not fundamentally different for 500 to 5,000-cow operations. Robotic milking does make it more feasible for really large farms to get their cows more spread out on the landscape, which provides a lot of environmental benefits and risk management.”

“The capital investment in robots is a direct function of milking time,” he said. “In a robotic milking system, liters or pounds of milk per minute determine how much milk you can produce, with each robot, and milking speed is a highly heritable trait.”

Udder shape and teat placement can still cause attachment failures. Although, the newer robots are much better at getting the cups on. If producers can cull cows with crossed rear teats before startup, it will make life easier, Rodenburg recommended.

“Sire selection doesn’t see results until more than three years down the road,” he said. “People should give priority to these traits in sire selection – and the sooner, the better.”

Comfortable cows with healthy feet are essential for robotic milking, so feet and leg traits may need more emphasis on replacement selection. In addition, if facilities are causing lameness issues now, it may require building updates.

“For example, uncomfortable stalls that reduce resting time, and issues such as persistently wet or dirty floors, need to be corrected for success with robots,” Rodenburg said.

The No. 1 factor in robotic milking success is the feeding program, Rodenburg said.

“A new robot herd should make sure they are working with a feed adviser that knows robots and has experience with formulating feed tables and partial mixed rations,” he explained. “With parlor milking, everyone uses a total mixed ration approach – every bite contributes equally to the nutritional requirement. But in robotic milking, it is the tasty, easy-to-consume pelleted grain fed in the robots that attract a cow to go there for milking.”

Operations implementing robotic milking will need to feed a good share of the grain separately from the mixed ration. Pelleted feed is a good choice because cows have a hard time eating fine ingredients, but the additional processing may increase grain costs, Rodenburg noted.

When adopting robotic milking, producers must switch from managing cows by a group to managing them on an individual level, Reinemann said. It’s a break from the decades-long management strategy of treating a group or pen of cows at one time.

Even veterinary visits may change under this new system, Rodenburg added.

“With parlor milking, if a vet is coming to do herd health work, we can sort the cows that the vet needs to see at a predictable time,” he said. “With robotic milking, the time is unpredictable, and she chooses the time.”

This problem can be addressed with barn design to sort and hold cows for up to 12 hours, but it’s a major change from current routines.

“Going forward, the improved cow comfort of being milked in the pen with no waiting or extra walking will be a big plus for this technology, both through higher production and longer herd life as well as offering a positive image of dairy farming to consumers,” Rodenburg said.