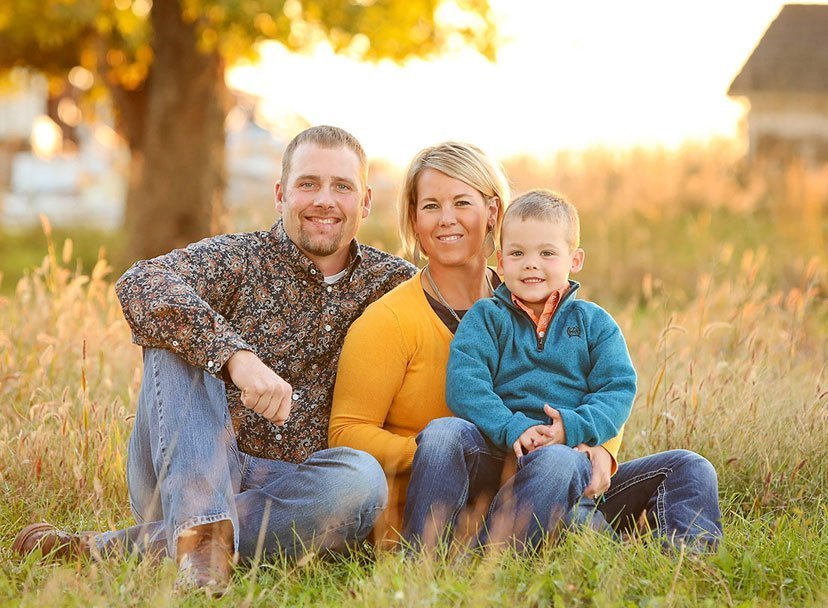 Leslie and her husband Nate started the family business after they both graduated from Iowa State with degrees in animal science, and soon after they were married. “It’s not like a typical farming operation that’s been passed down from generation to generation.”

Ruby Cattle Company is a seedstock business. They produce replacement females, donor females, and occasionally show heifers. They also raise seedstock bulls. They then sell bulls to commercial producers and other breeders across North America to improve and enhance their valued customers’ operations. “The goal is to improve the genetics of what [our customers] are raising.”

Ruby Cattle Company does extensive AI and embryo transfer, and calve at two different times of the year – spring and fall. “We raise Simmental, and SimAngusTM,” Ruby says. “We raise everything from a purebred black Simmental to a purebred Angus, and every percentage in between.”

During the week, Ruby works off the farm in her role as a territory manager for MWI, while her husband manages the Ruby Cattle Company operations full time. They have one full-time employee.

On the weekends, Ruby does a little bit of everything for the operations. Sometimes it’s hard physical labor, other times it may be computer work trying to finalize a catalog. “We are performance advocates,” Ruby says. “We spend time collecting birth weights, weaning weights and yearling weights, as well as other additional data. Much of my time is spent helping manage behind the scenes.” They also attend livestock shows across the country to promote their cattle.

The operation has given Ruby a unique perspective on the industry. “It has some cool synergies” with her role at MWI, she says. “Because of the extensive cattle operation we have, there are many things that have been learned over the years. I can draw from that for my job at MWI. That’s what makes it such a unique situation. There aren’t as many people that are involved in the industry as we are.”

There’s not much down time for the Ruby family. Their 5-year-old son, Creed is on the Ruby Cattle Company team as well. “He enjoys it,” Ruby says. “It’s a great way to raise a family.”