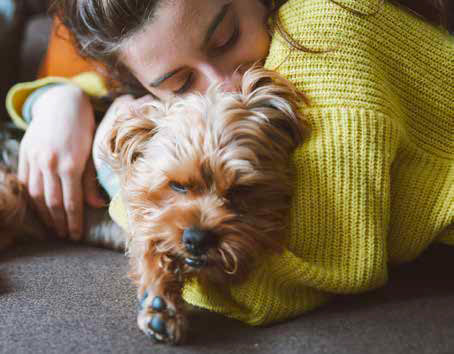 For Lap of Love, the pandemic has sparked new demand for in-home euthanasia services.

When Dr. Dani McVety founded Lap of Love in 2009, she didn’t expect it to grow the way it has. But the company, which provides in-home pet hospice and euthanasia services, has grown substantially, expanding from Florida to 35 other states. “It has turned into this thing that I never intended it to be,” McVety told the Fountain Report.

Now, Lap of Love is in a new phase of growth spurred by the pandemic. The company is expanding its team, and it’s introduced a “teleadvice” service that McVety believes will allow it to reach more pet owners.

McVety founded Lap of Love a few months after she finished veterinary school. She expected it at first to be a relatively niche service, given that in-home euthanasia wasn’t in high demand among pet owners and there were limited veterinary professionals doing this work. But in-home pet euthanasia “has been a new concept that I think pet parents in general have really embraced over the past decade,” she said.

The company had been growing 20-40% annually in the years leading up to COVID, she said. With the pandemic, that growth went into overdrive.

Since January of 2020, Lap of Love has more than doubled the number of appointments its doctors see each year, McVety said. The company had a rate of growth nearly 40% higher in 2020 than it did in prior years.

She attributes Lap of Love’s growth during the pandemic to two main factors: First, people spending more time at home with their pets were more aware of their pain and therefore wanted to do what they could to give them a peaceful end of life. Second, since Lap of Love has a mobile doctor base rather than a clinic-based team, it seemed to be a safer bet for veterinarians trying to avoid close contact with co-workers. This allowed the company to attract more employees and expand even more.

Demand for in-home euthanasia services was flat in the first weeks of the pandemic, in March and April of 2020. Lap of Love’s doctors tended to see about three appointments each day on average, down from about five before the pandemic, to give them more time to sanitize their clothes and equipment in between. Eventually, as necessary safety protocols became clearer, they were able to see appointments in similar numbers to pre-pandemic levels.

As the weeks progressed, McVety said, demand began to rise. Pet owners, who weren’t allowed to accompany their pets into appointments at clinics were panicking, she said, “because this is not a vaccine appointment. This is the highest emotionally charged appointment that you have as a pet owner.”

The rise in phone calls from clients was so great that Lap of Love’s live answer rate – the calls that are actually answered by a person – dropped: The company has traditionally had a live answer rate of more than 90%, but from mid-2020 to mid-2021 it was in the mid-60s. “We had so many calls that we couldn’t hire people fast enough to get on the phone,” McVety said.

This was stressful for her. She feels it’s important that a pet owner calling to schedule something as emotionally taxing as their pet’s death doesn’t get an automated customer service message.

“We don’t ever want to lose that professional respect that we’ve built over many years,” she said.

The company had to figure out how to protect staff while also supporting clients during an emotionally charged time. At first, that meant figuring out whether to see clients who had had direct contact with a COVID patient (as well as what “direct contact” should actually mean).

Eventually, the company’s leaders had to decide whether clients should have to wear masks. In part, this meant tracking the varied mask policies across the states the company serves. It also meant having to tell clients in some cases that they had to wear a mask in their own home while seeing their pet for the last time – something McVety wasn’t keen to do. Ultimately, she said, leaders left it up to the doctors to decide what conditions they could work in and to communicate with clients how to prepare.

Teleadvice: a ‘quality of life’ conversation

During the pandemic, McVety’s team decided to roll out an over-the-phone “teleadvice” service. The service had been in the works for some time, but when COVID hit and Lap of Love suspended in-home hospice care – which takes more time than euthanasia and therefore increased the risk of spreading the virus between clients and doctors – Lap of Love wanted something to replace it.

Through the new service, pet owners can call Lap of Love for a half-hour or hourlong appointment to discuss their pet’s disease and their options. McVety described it as a “quality of life conversation,” and she noted that doctors don’t prescribe medication on these calls.

This option has been a positive development for the company, she said, because it offers pet owners a chance for service without having to pay a steep amount for pet hospice. “I think that’s the biggest benefit to somebody that’s really struggling with what to do,” she said, “is a phone call to the doctor.”

Lap of Love’s growth has stabilized since the start of the pandemic. The company has reimplemented its in-home hospice care, and it’s hiring more doctors to expand further.

McVety, who had almost no experience with euthanasia during veterinary school, noted that students she encounters seem to be embracing it more than they used to. She’s a guest lecturer at the University of Florida’s College of Veterinary Medicine, co-teaching an end-of-life care course.

For her, delivering this service is an opportunity to allow people to share a peaceful goodbye with their pets. “Our product is an experience,” she said. “We’re not selling euthanasia; we’re selling a feeling that people have at the end of the life of their pet.”

Editor’s note: This article originally appeared in the Fountain Report.

Lap of Love, which provides in-home pet hospice and euthanasia services, has grown substantially since the onset of the pandemic. This included growth in 2020 nearly 40% higher than in prior years.

Demand for in-home euthanasia may have risen because pet owners were more aware of their pet’s suffering since they were at home so much, and doctors found a safer work environment providing mobile care.

The company introduced a “teleadvice” service during the pandemic, so owners can get an affordable consultation to figure out next steps for their pets.