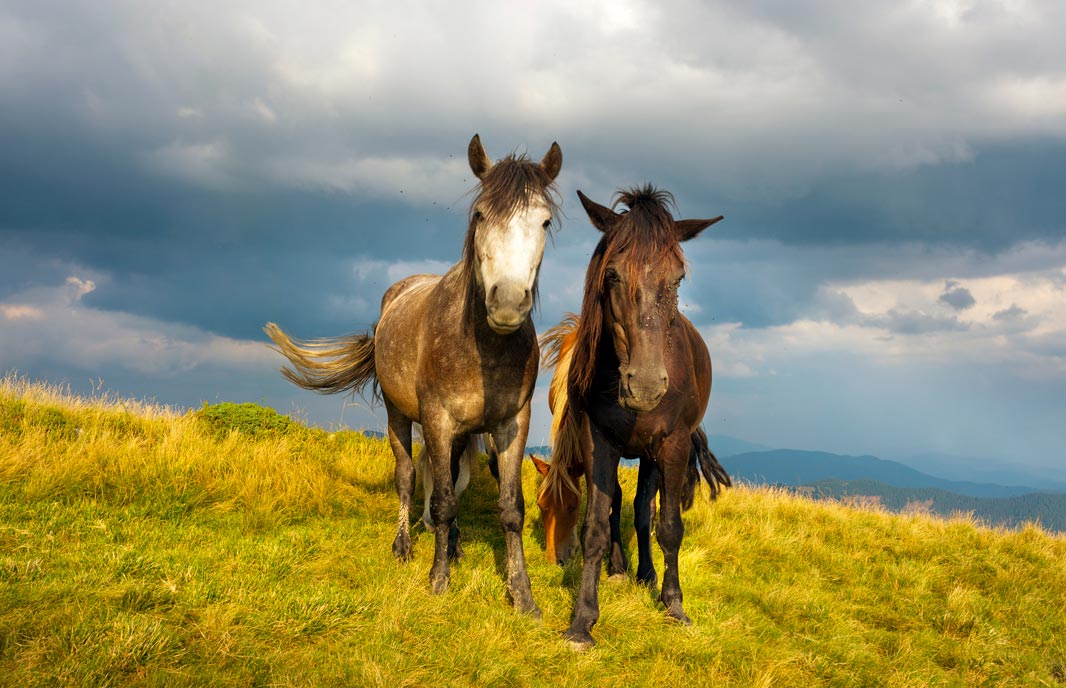 Veterinarians play a key role in Parasite Control in Horses by deworming.

In June 2019, the American Association of Equine Practitioners released an updated version of its equine parasite control guidelines. This followed the first round of guidelines, which had been released in 2013.

Wendy Vaala, VMD, director Life-Cycle Management Companion Animal and Equine with Merck Animal Health, was on the original task force that created the guidelines and was very familiar with them. Kenton Morgan, DVM, senior veterinarian, Equine Technical Services with Zoetis, frequently speaks to veterinary groups on parasite control, vaccinology, and infectious disease. He also understands the recommendations in the guidelines, especially the need for veterinarians to work closely with horse owners to implement parasite control. Both agree deworming shouldn’t be a “one-size-fits-all” mentality. Each horse is unique in its susceptibility to parasites, and veterinarians play a key role in helping horse owners create a strategic, individualized deworming protocol.

“The purpose of the guidelines, in my opinion, is No. 1, hopefully, to encourage veterinarians to become the primary source of information for horse owners and to be involved in designing parasite control programs on a farm-by-farm basis,” Vaala said. “Multi-drug resistant parasites are a big threat. One reason we’re talking about the problem now and recommending changes in deworming protocols is that there have not been any new classes of dewormers for horses in more than three decades and we need to be more strategic when administering the anthelmintics we have.”

In addition, Vaala said that horse owners have been left in charge of deworming horses on many operations because of the over-the-counter availability of paste dewormers and the lack of veterinarian engagement.

“We’re trying to re-blend the message through veterinarians that not every horse should be dewormed the same way,” she said.

A few questions horse owners, alongside their veterinarians, need to ask include:

“In addition to deciding which drugs to use in which horses, horse owners also need to remember sound husbandry practices that will in general decrease a horse’s exposure to parasites,” Vaala added. “So in a sense, we’re getting back to good horsemanship rather than expecting what’s in a tube of paste to do it all.”

Several factors should be considered when developing deworming protocols.

Different ages of horses require different products and doses for a successful deworming program. Vaala and Morgan pointed out the age of the horse is one of the most important factors that dictate which products will be used and when.

“Are you deworming an adult, mature, healthy horse, that’s 3 years of age or older, or are you worrying about deworming a younger horse?” Vaala said. “Younger horses, in general, are more susceptible to parasites and more likely to show signs of parasitism. In horses less than 2 years of age we worry primarily about roundworms or Parascaris species. These parasites can cause respiratory disease, poor growth, colic and even death when heavy infections are present in foals and weanlings.”

Vaala said finding roundworms in yearlings and 2-year-olds is often a reflection of an ineffective deworming program during the first year of life.

“We like to focus on eradicating ascarid infection by the time youngsters are 1 year of age,” she said. “Ascarids are our target in the very young horse; then we worry about small strongyles or cyathostomins and tapeworms in older youngsters and adult horses.”

The AAEP recommends young horses be dewormed three to four times that first year of life, Morgan added. “Deworming products are going to vary depending on what we’re after. Early on the primary parasites are roundworms or ascarids,” he said. “The benzimidazoles, fenbendazole, and oxibendazole are excellent for treating those parasites. Pyrantel is also good for roundworms. Those would be the primary products, particularly during the first couple of treatments for foals. After that, we can consider using a product like ivermectin or moxidectin as horses become 9-12 months of age and older.”

“The majority of adult horses (≥ 3 years of age) tend to demonstrate a natural resistance or genetic resistance to small strongyles,” Vaala said. “This means if I collect a fecal sample and perform a fecal egg count, I’m likely to find at least 80% or more of mature horses on a farm are low strongyle egg shedders – < 200 eggs per gram (EPG). Thus, there’s no reason to be deworming those low egg shedders three, four or five times a year.”

“It’s not just a bad use of money, but we realize that excessive use of dewormers places selective pressure on the worm population and can accelerate the development of drug resistance,” she added. “Yet, if you look at the deworming recommendations that became popular 20 years ago, what we preached to horse owners was to deworm your horse every two months and rotate the dewormer used each time. Now we realize that was bad advice. It doesn’t individualize the deworming protocol based on the horse being treated, the parasite(s) being targeted, or the spectrum of activity of the dewormers being used; it is too random an approach. We need to change that whole mentality.”

“I encourage veterinarians to give their clients weight tapes,” said Vaala, if access to a scale is unavailable. “We know weight tapes aren’t perfect, but it gives owners a ballpark of the minimum dose of dewormer they should be giving. Some tubes of paste wormers will treat only a maximum weight of 1,100 pounds. If an owner has a 1,300-pound Quarter Horse or 1,500-pound Warmblood, then they should be administering almost a tube and a half.”

Underdosing with a dewormer can also contribute to the development of resistance.

Morgan advises that the environment horses spend their time in plays a large role in their exposure to parasites and the effectiveness of dewormers.

“Where horses are kept, stocking density, and manure management all affect parasite exposure,” he added. “While working with veterinarians and horse owners, there are several questions to be asked when evaluating a farm to determine the deworming needs of horses.

“All of these factors will impact how we deal with the horses on a farm and are questions veterinarians need to be asking,” Morgan said. “When it’s hot and dry outside, we don’t need to be deworming horses – the environment is not conducive to those larvae surviving for very long.”

“At Zoetis, we’re totally aligned with the AAEP Guidelines’ recommendation of age-appropriate deworming that targets ascarids in young horses and encysted small strongyles in adult horses twice per year, aligned with grazing season, along with tapeworm treatment in the fall. The AAEP Guidelines point out the importance that every adult horse be dewormed one or two times per year at minimum, and that fecal egg count testing is used to identify high shedders that may need additional treatments. Because moxidectin treats the encysted form of small strongyles and has been shown to be significantly more effective than five-day double-dose fenbendazole, the AAEP Guidelines now also consider moxidectin the ‘treatment of choice’ against small strongyles. Therefore, moxidectin is the optimal treatment option in late spring or early summer, when we know exposure rates are high. And because small strongyles and tapeworms are the targets in the fall, moxidectin plus praziquantel is the optimal treatment choice in late fall or early winter.”

Performing fecal egg counts provides more specific information about the parasites affecting each horse. This is another opportunity for veterinarians to take an active role in designing a parasite control program that fits both the farm, individual horse and owner. Determining whether a horse is a low or high shedder helps decide how often that horse is dewormed.

Both Morgan and Vaala recommend performing a fecal egg count reduction test on horses that are shedding at least 200 EPG or more.

“For example, if a fecal egg count reveals a horse has 300 strongyle eggs per gram (EPG) prior to deworming, I use that pre-treatment egg count to determine how effective a dewormer is against strongyles on that farm,” Vaala said. “The horse is treated with the dewormer recommended ensuring the correct dose is used based on body weight. Then two weeks after treatment, another manure sample is collected and a fecal egg count is performed to see if there was an appropriate reduction in the number of eggs. Depending on the drug used, the egg count should be reduced by greater than 85 to 95%. That means a pretreatment egg count of 300 EPG should have been reduced to less than 15-45 EPG, if the dewormer just given was effective.”

“As veterinarians and horse owners, we’ve got to use all these products very judiciously to maintain their effectiveness and prolong their usefulness in the marketplace,” Morgan added. “That’s why we really support veterinarians being in the loop on parasite control. Offering fecal egg counts as a service to clients, then following up with fecal egg count reduction tests are important to properly manage and use all of our anthelmintic products appropriately.”

“We’re recommending deworming horses less than we used to, but now we’re doing it much more strategically,” said Morgan. “We’re doing as good or better job at controlling the parasites but using much less deworming products.”

“By being more strategic with treatments, the slower we will select for resistance because resistance is inevitable,” he added. “If any one product is used long enough, we will begin to see resistance. And we’ve seen that already with products that have been available for several decades. It’s not because those products are bad, it’s just the nature of the parasites. And over time, the subpopulations of resistant parasites become the dominant populations. We need to be cognizant of this to ensure that products continue to be effective against parasites and available to the market.”

As a dealer, you can become familiar with the AAEP guidelines and help encourage veterinarians to become more involved in their clients’ deworming programs. The available products can all be used effectively and, when used judiciously, will help keep horses healthy.