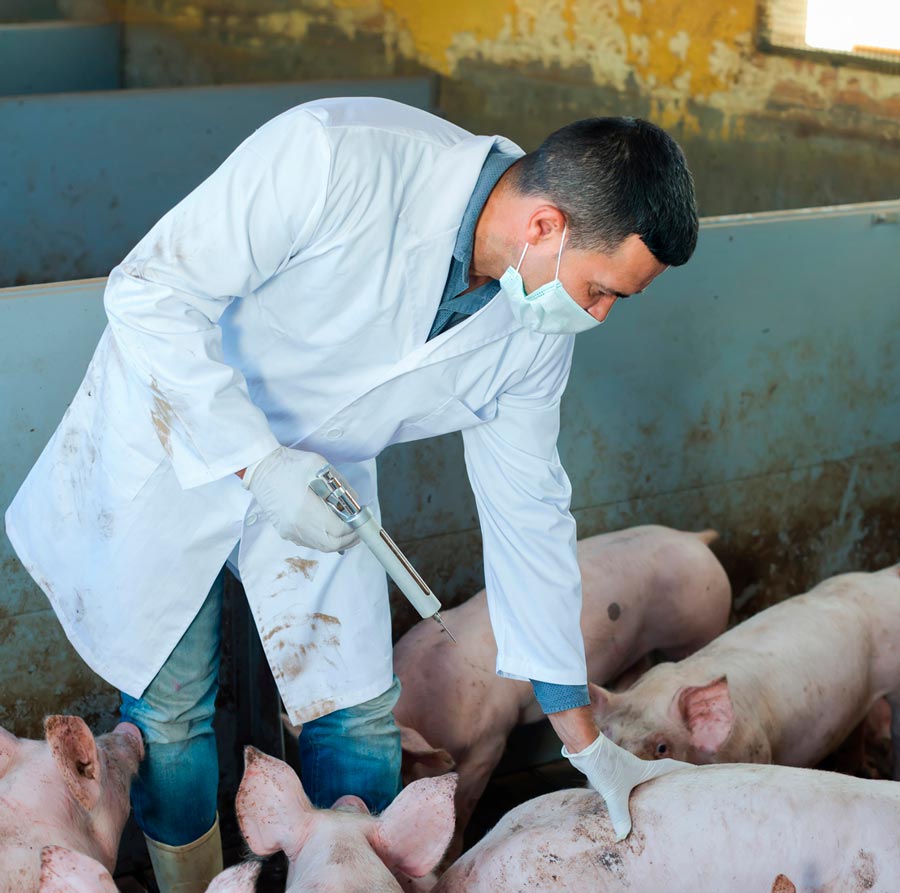 Porcine Sapovirus: A Potential Cause of Subclinical Infections

Porcine sapovirus (PSaV) may be a sneaky cause of diarrhea in young pigs. The pathogen is in the same family as human norovirus – the scourge of cruise ships and day cares worldwide.

In pigs, PSaV diagnosis is difficult for several reasons. First, it may tag along with other diarrhea-causing challenges like rotavirus in farrowing houses. Second, identifying sapovirus in herds was only available fairly recently through PCR testing.

Awareness of clinical disease related to sapovirus has been growing since around 2018. Once PCR tests were developed, producers and veterinarians could better understand the potential cause of morbidity. Yet, prevention options were still limited.

In 2020, the Swine Health Information Center (SHIC) added PCR tests for PSaV genotype III for neonatal diarrhea investigation. The tests were added after studying a farm with piglet diarrhea starting around 10 days of age. Typically, the affected piglets lost one to two pounds of expected weaning weight.

A subsequent prevalence survey of more than 500 samples comparing pigs with clinical diarrhea and clinically healthy pigs suggests that porcine SaV genotype III may play an important role in causing swine enteritis and diarrhea, according to the SHIC.

“Every pig that we can produce that is healthier at weaning is going to make a producer more profitable,” she said. “The true prevalence of sapovirus in the industry is unknown. In the preweaning stage, rotavirus can be a prominent cause of scours. Sometimes the rota tests are negative, and the bacteria and coccidia tests are negative. So, what could it be? Before we had sapovirus testing, we didn’t know what was causing diarrhea in those cases.”

Sequencing technology allowed Sebo-Decker and her colleagues to investigate a greater range of pathogens in a herd experiencing preweaning scours. One challenge with definitively identifying sapovirus is that pigs don’t seem to shed the virus past 10 to 14 days. Plus, scours can be caused by multiple diseases – sometimes at once.

“It would be great if every pig had one disease,” she says. “If we identify sapovirus, that doesn’t mean that rotavirus wasn’t causing problems, too. In herds where rotavirus is well controlled, it has been great to have the ability to add a sapovirus vaccine.”

Most livestock vaccines are approved by the U.S. Department of Agriculture. The journal Future Medicinal Chemistry described the cost of a new pharmaceutical or biologic product as taking between five to 15 years and around $100 million from initial concept to market. Vaccines meeting an urgent need may be considered for a conditional license and brought to market more quickly.

“For example, in the 2013-2014 PEDV (porcine epidemic diarrhea virus), we had piglets dying and needed options,” Sebo-Decker said.

Still, there is an industry need for a more rapid response to livestock diseases causing economic harm. Traditionally, producers needing these vaccination options can use autogenous, produced from specific samples taken at the farm level. Autogenous vaccines still require the virus or bacteria to be grown in a lab, which can take time and some pathogens just simply can’t be grown.

“No one can seem to get sapovirus to routinely grow well,” Sebo-Decker added.

Merck Animal Health developed a third option to create vaccines for new and evolving pathogens with its SEQUIVITY platform, which uses RNA Particle Technology to take a genetic sequence from a targeted pathogen – like sapovirus or influenza – and create a herd-specific vaccine in a matter of weeks.

The RNA particles deliver information to the immune system and do not replicate. It also allows producers and veterinarians to target multiple pathogens and farm-specific strains with a single injection.

The platform is a good match for pathogens like PSaV, Sebo-Decker said.

“The VP1 gene in sapovirus was found to be immunologically stimulating. It’s just a single gene sequence,” she said. “What’s cool about this technology is that we can combat diseases that we normally don’t have good solutions for, like rotavirus C or sapovirus. Now, we can make a vaccine.”

The platform is especially helpful for viruses that mutate quickly, like influenza and rotaviruses. Merck Animal Health is also looking at other diseases that are just becoming more well understood as an industry challenge.

“Parvovirus 2 is a pretty new pathogen and we’re in the early investigation stages of its role in disease and how vaccines can play a role in mitigating it,” Sebo-Decker said. “PED (porcine epidemic diarrhea virus) is great historical example of how this vaccine technology was used to rapidly combat a new and emerging pathogen. We are using the spike gene of PEDv to stimulate immunity – similar to what we’ve seen with human coronavirus mRNA vaccines.”

The SEQUIVITY platform uses a dashboard to track strains of influenza and allow the veterinarian to select the strains circulating within the farm, plus those within for example a 25-mile radius.

“You can pick whatever antigens you want and combine them into one product for respiratory or enteric health,” she said. “It can be a rotavirus and a sapovirus in one that reduces the number of injections and reduces labor costs. It’s a unique approach that we have available compared to traditional commercial vaccines.”