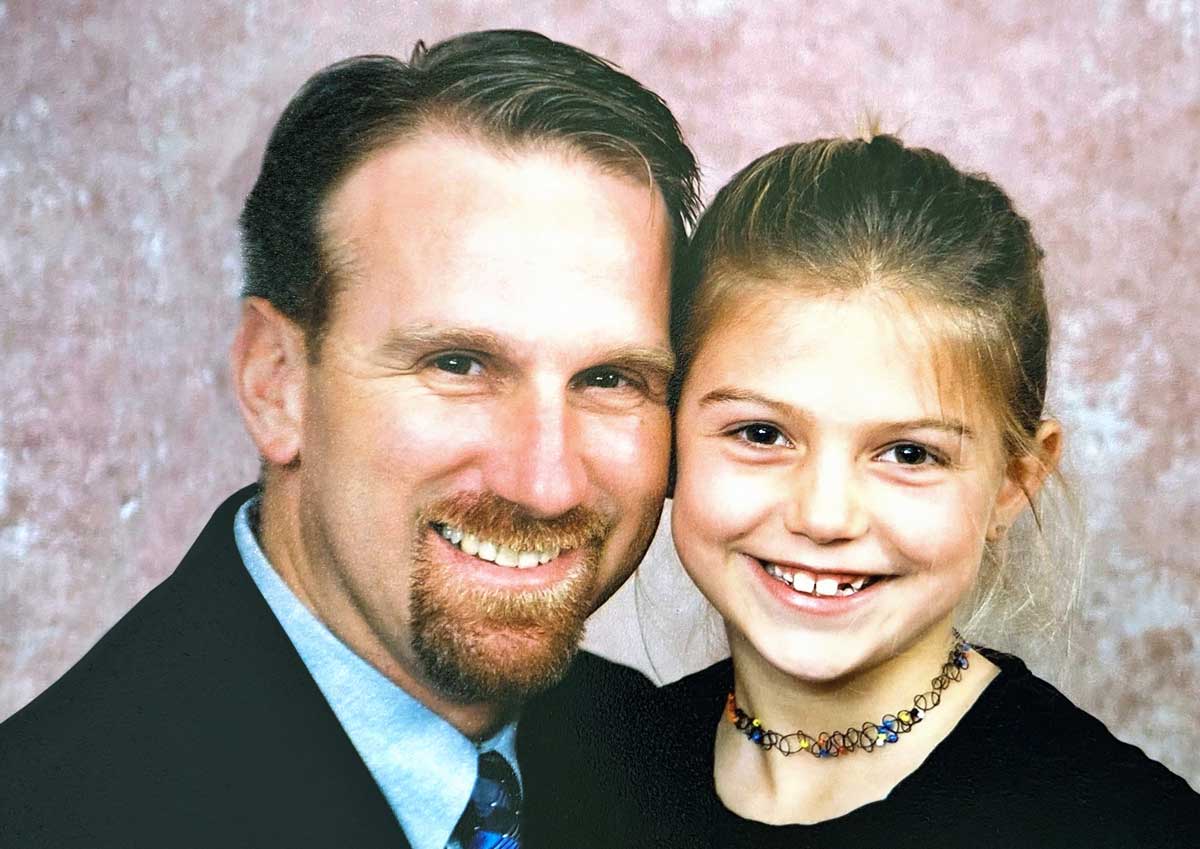 A story of one family’s commitment to helping veterinary clinics in Northern California for more than 30 years.

Mike Mertens doesn’t mind windshield time. Most weekday mornings you’ll find him driving up and down the Northern California coast, visiting customers from the San Francisco city limits to the state border with Oregon. “I’m an early riser,” said Mertens, a territory manager for Victor Medical since 1988. “I love what I do, I love my clients, and Victor Medical has been very good to me.”

On some ride-days with a manufacturer rep, those visits can become a family affair. That’s because Mertens’ daughter Amanda is a rep for Nutramax Laboratories.

The first time Amanda joined Mike on a workday was in kindergarten. “In the beginning, it was just a way for me to spend more time with him when I wasn’t in school,” Amanda said. But, throughout the years it turned into much more than that. When Amanda was in high school, Mike would take her on visits to clients a few times each summer and she would help with note-taking and filling out paperwork. Mike did the same with his son when he was old enough. Through those visits, Amanda said she “truly developed a passion for the industry and a love/admiration for the people he interacted with daily.”

From a Sonoma dairy to sales

Mike Mertens grew up on a dairy in Sonoma, California, an operation his parents still own. After college, Mike helped at the dairy but continued to look for something more business related. While his friends were setting up interviews with human pharmaceutical companies, Mike’s family background gave him the idea to look for a veterinary medicine job. His older brother put Mike in touch with a sales rep, who threw out a few industry names – Pfizer, Merck, etc. A couple of days later, the rep called and said a distributor was starting to do some business in North California. It turned out to be Victor Medical.

“So I gave them a call,” Mike said. He talked with Dan Morrow, who would become one of Mike’s closest friends through the years. Mike agreed to work a Tuesday with Morrow calling on customers, with a follow-up interview on Thursday. “I walked in on Thursday, talked to a gentleman for 10 minutes, and he offered me the job.” Mike hasn’t looked back.

While products and technology have changed, Mike said distribution’s key differentiator – relationships – has remained at the forefront of how he approaches veterinary clinics. “It’s about building relationships, building trust,” he said. “The philosophy Dan Morrow taught me early on was you work for two people in this industry – Victor Medical and your client. If you keep both of those people happy, things usually work out.”

Mike said he enjoys working for a family-owned company. “Our big calling is we believe that if we provide the best service to our clients, that is where we’re going to help them be most successful.”

In the current atmosphere, Mike’s clients feel overwhelmed with curbside appointments, increased patient volume, staff stress, and staff shortages. “Clinics are stretched to their max right now,” he said. “Their staffs are working extremely hard and stressed. I’m just trying to help them manage through those issues.” Mike said he would try and pitch in to solve inventory or equipment issues and help clients improve their day-to-day workflow to limit the stress on the veterinarians and their staff. “We’ll also try to do fun things like bring coffee, snacks, or lunch, but you have to manage that. I don’t want to add to their stress with scheduling too many events.”

Some stress is avoidable. But in other situations, such as emergencies in treating pets affected by natural disasters, stress is unavoidable. In Northern California, veterinary clinics must be prepared for the possibility of a wildfire breaking out. That was the case in 2017, when a wildfire threatened several of Mike’s clients, including Dr. Jeff Smith’s animal hospital in Middletown. The wildfire started in the evening. The next day, Mike called Dr. Smith to ask him what he needed. Dr. Smith, who was trying to get back into the area because he had been at a meeting, said he didn’t know. “We gave him a good credit on his account, and he started taking care of animals without having to worry about inventory,” Mike said. Dr. Smith could focus on pets, strays, and coordinating care with the shelters and humane society, while Victor Medical supplied him with fluids, IV lines, bandage wraps, and antibiotics. “Relationships are key,” Mike said.

‘Treat everyone with respect’

Like her father, Amanda seemed to gravitate toward a career in animal health sales because of her upbringing. In college, she briefly majored in psychology at Cal Poly, but by her sophomore year, she realized it wouldn’t be a fit and switched to agricultural business. After graduating college, she worked for about eight months for ADP, then started with Nutramax in May 2018. By 2021, she was named the sales rep of the year for Nutramax.

Her territory spans Monterey County south of San Francisco, all the way north to Eureka. Her responsibilities include ride-days with distributor reps, cold calling to get new products in front of different clinics, and training on products, whether through breakfast meetings or lunch-and-learns with staff.

“Because we have such large territories, we don’t get face-to-face meetings with hospitals as frequently as distributor reps,” Amanda said. “So, I lean on my distributor reps who have those stronger relationships, because they’re in the clinics weekly; I see them maybe every other month. Having them be able to give us a warm welcome or bring us in and be seen with them breaks down the walls of the accounts. With them, I can get more done faster because I don’t have to break down the walls myself.”

Like Mike, Amanda can see from her daily interactions that veterinarians are overwhelmed with everything that’s been thrown at them, from staff turnover to completely altering how they operate on a day-to-day basis. “It’s been a challenge trying to help them make changes with a product while they’re already making so many other changes,” she said. “I’ve really had to rely on the relationships that I’ve made in the years before COVID, as well as just persistence, and, seeing them as regularly as I can so that they have that trust and respect, not just as a sales rep but also as a business partner. Sometimes sales reps can be known for turn and burn. They just want to get the sale and walk away. But I think about it from a longevity mindset, which is something I got from my dad.”

Amanda said watching how her father interacted with clients, and the trust he built with them, played a big role in the success that she’s seen as a manufacturer rep. “He always told me that anyone you meet in the clinic could be a future decision maker, whether it’s next week or in a couple of years, so treat everyone with respect. That’s probably the truest advice I’ve ever received from him in the industry. You never really know if a front staff person could be the decision maker the next week. So I’ve taken that to heart.”

Being able to grow up and hear how her father talked about different products and companies gave Amanda a bit of an upper hand coming in from college. “While I didn’t have clinical experience, I did have that experience watching my dad.”

What’s a ride-day like with Amanda and Mike? “It’s fun!” Amanda said. “Some accounts remember me from working with my dad as a kid. My dad has been in the industry for over 30 years, so he obviously talks about my brother and me with his accounts. Some will say ‘I’ve seen pictures of you over the years,’ and others don’t even realize we’re related.”