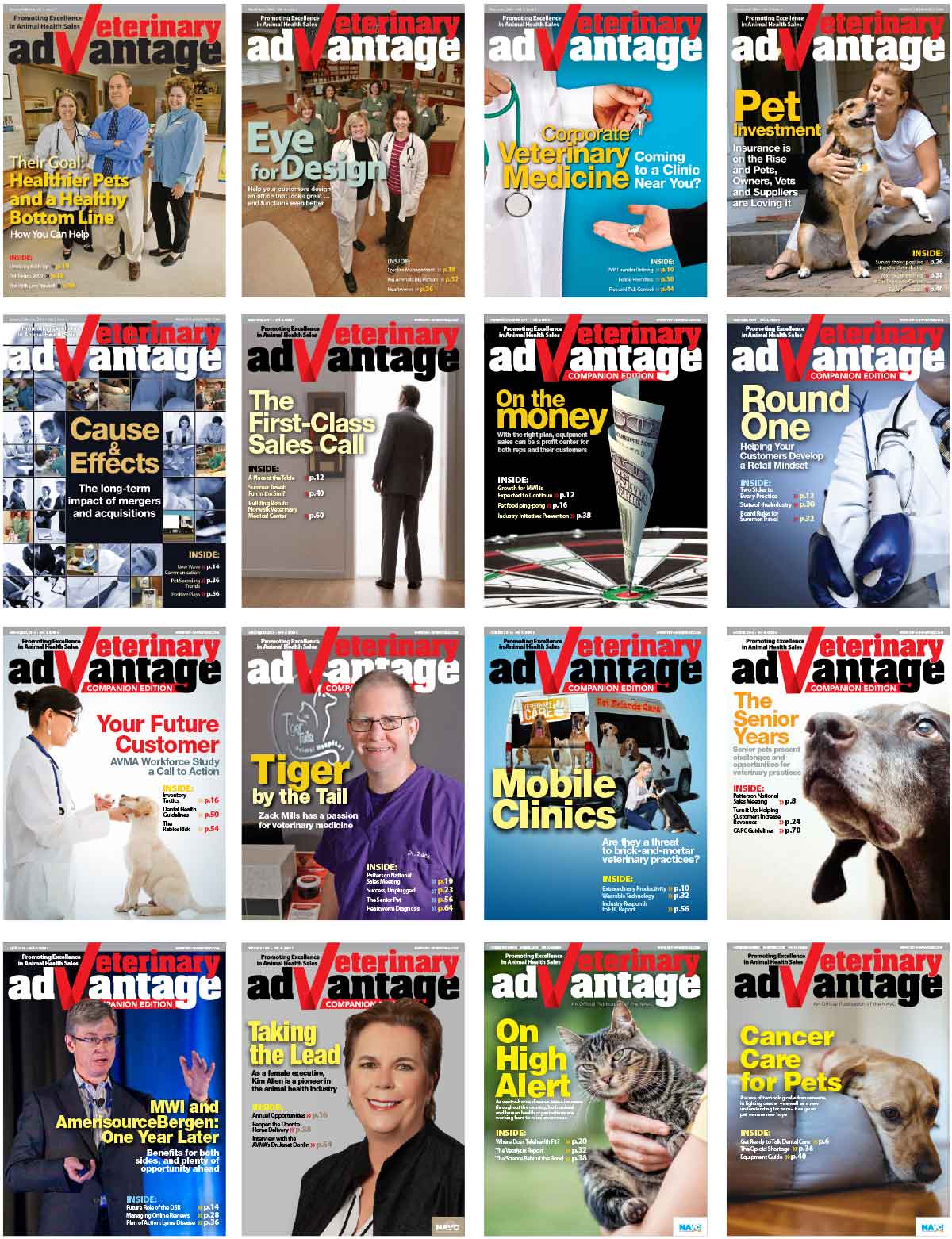 A look back at the trends and stories making headlines a decade ago in Vet Advantage.

The rise of corporate veterinary medicine. Growth in spending on pet products and services. An increasing amount of acquisition and consolidation among animal health companies.

Do these trends sound familiar? They were some of the headlines Veterinary-Advantage covered when it debuted in 2009.

“Being a doctor is the easy part,” says Flynn Nance, DVM, Honey Creek Veterinary Hospital (Conyers. Ga.). “But, we are a small business and must be run as such if we want to continue to be in business in five years.” That doesn’t necessarily come naturally to animal doctors, he adds. “It can be a vicious cycle,” says Cassandra Allbritton, CVPM, Tampa Bay Veterinary Medical Group, (Tampa, Fla.). “Many veterinary owners aren’t able or willing to [pay for] an office manager.” Without the know-how to properly manage their accounts payable, smaller clinics sometimes can’t succeed, she points out. “They may be saving $40,000 or $80,000 a year, but hurt themselves in the long run and may have to sell their practice or consolidate. And, their practice [rarely] is worth as much as they expect it to be.” Veterinary owners must invest in their staff, she adds. “They must ask themselves, are we able to respond to our clients’ needs and compete with other practices?”

The fact is, many vets consider themselves caregivers first, business owners second. They got into this line of work because they love to care for animals. Even so, most know that without margin, there’s no mission. But the question is, are they equipped to do what it takes to increase the profitability of their practices? The answer is “yes,” according to those with whom Vet-Advantagespoke. It may not come as second nature to many of them, but vets can learn how to improve the profitability of their practices while improving patient care. And distributor reps can help them do so.

Building a new, modern office with state-of-the-art technology may be a bold, even necessary, step toward profitability and success. But in truth, most vets already have the resources they need – staff, technology and physical plant – to build a successful practice. What they might be lacking is the knowledge and mindset necessary to capitalize on those resources.

“Veterinarians suffer from self-doubt,” says John Sheridan, BVetMed, CVPM, DMS, MRCVS, and president of Veterinary Business Briefing, Storrington, West Sussex, England. “They don’t value their contribution to animal and human health,” says Sheridan, who spoke at the recent North American Veterinary Conference in Orlando, Fla. “They underestimate their clients’ needs. They underutilize their professional and support staff. In short, they are professional clinicians with no training or background in management.”

“I think space has become more efficient than in the past,” says John Tait, MS, DVM, MBA, CFP, Department of Clinical Studies, Ontario Veterinary College, University of Guelph in Ontario. He is also president-elect of the American Animal Hospital Association. “Trends include more professional input from architects and advisors in making traffic flow more efficient, improving workplace environments, improving the experience for clients, and making practices greener, [with such technologies as] geothermal heating and cooling. We have also seen more dedicated-use rooms for things like endoscopy, ultrasound, euthanasia and other specific procedures.”

The Rise of Corporate Health

The small independent practice is alive and well. But as more professionals strive to improve the quality of their life by balancing family and personal interests with their careers, corporate animal health continues to be a growing trend.

An upward trend in pet insurance may set the animal health market on a new course. “Pet owners today are willing to spend more for their pet’s care,” says Jack Stephens, DVM, president, Pets Best Insurance (Boise, Idaho). “They are beginning to treat them more like children, with regard to both spending and emotionally.”

Particularly in tight economic, times when people have to cut back, pet insurance becomes even more important, adds David Goodnight, DVM, president and chief operating officer, PurinaCare®(San Antonio, Texas). “Many don’t have the same reserves they once did,” he says. “Their bank accounts are dwindling and they [risk] running into a situation where they can’t afford treatment for their pet.”

If not recession-proof, then certainly recession-resistant. That’s how Chicago-based investment firm William Blair & Co. considers the veterinary healthcare industry. And that’s good news for Veterinary Advantage readers. So too are Blair’s predictions that veterinary diagnostics are strong and growing stronger. Key findings include: Long-term growth remains solid, though the current recession is having an impact on the industry; Diagnostic laboratory testing – both in-clinic and reference laboratory services – should continue to increase over the next three to five years; Veterinary professionals seem pleased with the performance of their current distributors, equipment manufacturers, and lab services providers.

“To be clear, our intention is not to imply that the veterinary healthcare industry is completely immune to economic cycles, but rather that it appears to be much more resistant to dramatic swings than other areas of the economy,” write the authors. They cite the fact that growth in the veterinary healthcare market decelerated by roughly 1 percent on average in years when the U.S. economy fell into a recession but still maintained positive growth (average more than 4.6 percent growth) during each of the last five recessionary periods.

A Bitter Pill to Swallow

It may not take a village to raise healthy pets, but it often takes a team. Particularly when it comes to getting pets to take their medications, the veterinarian, the client and even the sales rep can all play an important role. There are no solid numbers pointing to the rate at which pets adhere to taking their medications, according to John Albers, DVM, executive director, the American Animal Hospital Association (AAHA). “Recent studies have found a 60 percent adherence rate for heartworm medications, but there are [not many] studies for adherence to other medications,” he says.

Getting clients to take their pets to the veterinarian is the first obstacle to overcome with regard to adherence to medication, according to Lee Cahalan, brand manager, Novartis (Greensboro, N.C.). A 2008 survey by the AAHA found that a third of veterinarians reported a drop in visits from the first half of 2007 through the first half of 2008, largely due to the economic downturn. The study indicated that revenues dropped for about 28 percent of the 550 respondents during that time period. “We have seen pets become more important in people’s lives, but it appears we still have a ways to go to get pets the care they need,” says Cahalan. “Among those pets that do visit the veterinarian, we see that adherence with monthly heartworm and parasitic products is pretty good. And, we see greater adherence with oral medications, probably because pet owners think of topical products as as-needed products.”

Two strong organizations, a bunch of years of experience, and the determination to get things right without undue delay should make the marriage of NLS Henry Schein and Butler Animal Health Supply a strong and vibrant one, according to newly named chairman and CEO of Butler Schein Animal Health, Kevin R. Vasquez. “This is something that isn’t unusual for Henry Schein at all,” he said. “They’ve been at the forefront of growth and expansion, organically and through acquisition, for a number of years.” In fact, Henry Schein acquired NLS Animal Health, a $150 million animal health distributor based in Owings Mills, Md., in mid-2006. Since becoming a publicly owned company in 1995, Henry Schein’s animal health business has grown significantly in Europe, with sales in the last 12 months of approximately $620 million. Henry Schein Animal Health International serves more than 18,000 customers and has operations in eight countries.

In a conversation with Veterinary Advantage, Pfizer Animal Health Director of Channel Management Jeff Sizelove promised “business continuity” in 2009 for the company’s veterinary and business partners in the wake of Pfizer’s $68 billion acquisition of Wyeth, including its Fort Dodge Animal Health subsidiary. The deal was finalized in October. Pfizer’s acquisition of Fort Dodge produced immediate changes in its product line, many of them necessitated by the Federal Trade Commission. As part of a consent agreement with the FTC, Pfizer agreed to sell approximately half of Wyeth’s Fort Dodge U.S. animal health business to Boehringer Ingelheim Vetmedica, including vaccines for cattle, dogs and cats; and other pharmaceutical products used in treating cattle, dogs, cats, and horses.

Pfizer also agreed to sell one of its horse vaccines to Boehringer Ingelheim, as well as two of Fort Dodge’s three manufacturing facilities. It also agreed to return to Virbac S.A. the exclusive distribution rights for its equine tapeworm parasiticides, which Pfizer had obtained in 2000 in a 15-year licensing agreement with Virbac.

According to the APPA, $3.2 billion was spent on pet services in 2008, projected to grow over 6 percent to $3.4 billion in 2009. It won’t be surprising to see this growth continue for several years, particularly as retail behemoth Wal-Mart expands its pet grooming facilities further into its stores.